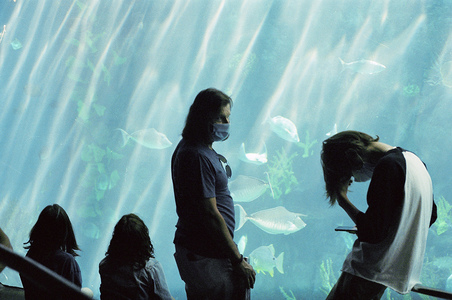 Kyle Mangione-Smith says, " Parents have played a key role in pushing America to open back up in the past several months. Having been cooped up working from home with their children, fearing stunted development as a result of online schooling, they had very legitimate reasons to want things to return to normalcy.

Of course, the idea that the behaviors and dynamics that have evolved within families over the last year would suddenly drop to the wayside once public spaces opened back up was a fantasy that many had been clinging to, and one that couldn't ever hold true in reality. Across three of the most established destinations for Los Angeles families (the Getty, the Aquarium of the Pacific, and the Santa Monica Pier), these photos seek to document the ways that the pandemic has altered the ways parents and children interact with each other and the world around them within environments that were previously seen as stabilizing for the family dynamic."