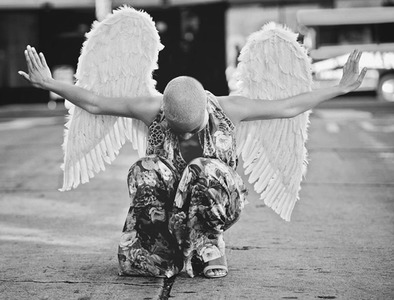 THANKFUL by JOSETTE WYATT
(Click on image for reviews)

CURATOR BARBARA PICKLES: "Work submitted for “Women and Beauty “ was courageous and strong which made picking winners extremely difficult. After consideration there were some that really spoke to me.

I chose Josette Wyatt’s, "Thankful" for first place. This image is so potent. It is not the typical beauty shot, but an image of a women, no. . . an angel bowing in thanks. What a powerful gesture! Her strong arms spread, her wings out, and her head bent, but not in resignation, in truly heartfelt gratefulness.  Wyatt turns the table on us with an angel, who is usually receiving thanks, in a triumphant deep knee-bent bow. This image also implies that women are angels, the wings representing their sublimity. This image speaks more about who the woman is as a person than what she looks like, which is really what beauty is. What an inspiring image for humankind!"

JOSETTE WYATT: "I love to capture what I call 'in the moment' shots, and that's also one of the reasons why I named my business In the Moment Portraiture. I do what I call semi-posed captures where I orchestrate the client into a certain posture but let it naturally fall into what it's going to be. There's a story there, in that moment, just the same."

Josette has been working on the Angel Wings series for the past year and a half and in this portrait shoot, she asked the subject if it would be OK to add the angel wings. When the subject saw the photographs she started to cry and was overcome with gratitude. Josette says, "Sometimes as an artist, we don't realize how our art can affect others in such a positive way and give you such a feeling of joy and peace. I know it's a little corny but it was just a great moment for me and a great moment for her."

For more information about Josette, go to:

CURATOR STEVE ZMAK: "With an Atlas-like stance the subject seems to be pushing open a breach for herself in a cold concrete world., while at the same time gracefully bowing in gratitude. There's tension from the asymmetry pose, and the subject struggles to balance herself in an ongoing struggle. The image is compositionally strong from a combination of elements: her arms line up with and strengthen the horizon, the cracks in the pavement all lead to her, she is centered yet off center, out-of-focus background to isolate the subject. That the subject is not recognizable makes her universally iconic of all women, and the addition of the angel's wings illustrates the notion of beauty at a mythical level."

CURATOR JANE SZABO: "Strength. That is what this image relays to me. This is a women who can stop traffic, who can move mountains, who will not be bowed over by adversity. Beauty is a self sufficient woman who is strong but who can also kneel down and ask for help. I have no idea what the context of the image really is and I appreciate that much is left to the imagination."