Paul Ivanushka says, "My work looks at the environment from often overlooked perspectives.  I focus on the beauty of the natural designs, patterns, textures and tonal ranges found in natural objects. Many people move through nature too fast and miss so many wonderful images and moments. My goal is to find these overlooked images and moments in nature and share them with as many people as I can. It’s a challenge as Nature does not give herself up easily.

I anchor my landscapes with a human artifact or evidence of mankind's presence on this planet. But it always amazes me how great we humans are...and at the same time how insignificant our achievements become when put next to nature. Nature will always dominate…it will always endure.

My goal is to show this through my work"

As a result of a trip to the Grand Canyon and inspired by the canyon photographs of the Kolb Brothers, Paul developed his first roll of film when he was ten years old. Since then exploring the outdoors has been a major portion of his growth and life.

Paul was born an Army brat at the West Point Military Academy and was raised in various cities across the United States where he was exposed to the diversities of both people and nature.

After studying at Brooks Institute of Photography Paul spent most of his career in the printing industry learning and managing tone reproduction on high speed web offset presses.

Paul is a Software Business Analyst and currently resides in Inglewood, California.


“There is a vast difference between taking a picture and making a photograph.” 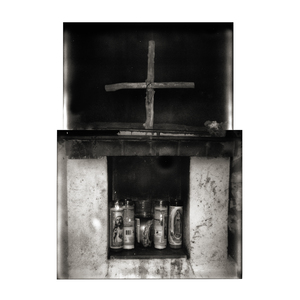 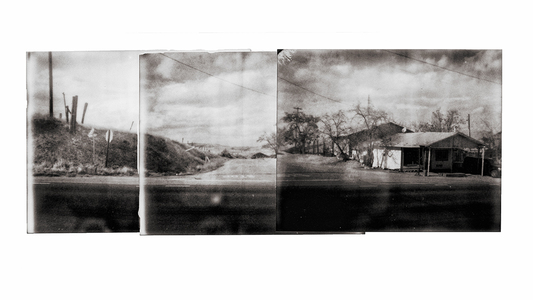 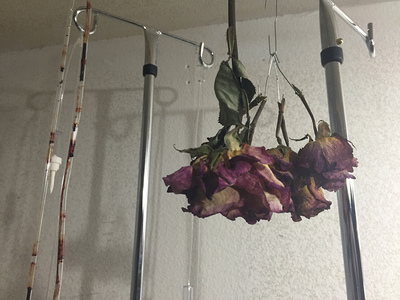 Rain Lucien Matheke says, "I am interested in the exploration of identity as it relates to gender and the body, and the navigation of the identity as it changes and evolves as a result of illness and disease.

The destructive, contemplative, and repetitive processes used to make my work examine struggles between death and preservation as well as acceptance and control, in an effort to establish a sense of permanence in a decaying body. Illness comprises much of life. My practice embraces and celebrates the seemingly futile pursuit of the preservation of life and the fragility of the body."

Rain Lucien Matheke is an interdisciplinary artist living and working in Los Angeles with her partner and cats.  She received her Master’s Degree in Visual Art from California State University, Northridge in 2016.  Rain has had several solo exhibitions in the Greater Los Angeles area, and exhibited in group shows and performed throughout California, as well as in Nebraska and New York. 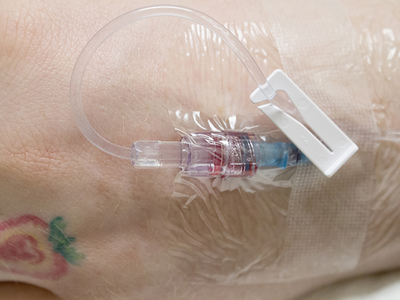 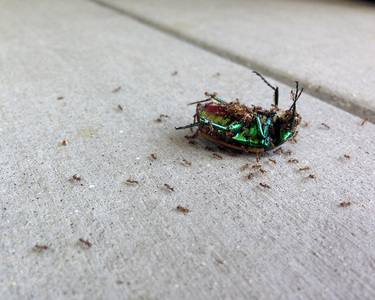 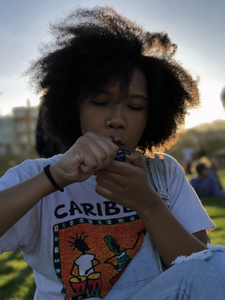 Ryan Koenig says of this work, "The collection, "Youth of San Francisco", features two individuals who are surviving and thriving in one of the most expensive metropolitan cities in the world. They are facing the problems that are causing the culture of San Francisco to change, but they are staying.

The focus of this project is how the counter-culture youth who are still present in San Francisco and trying to survive and thrive with rising rent prices, lower purchasing power than their parents and grandparents, and other aspects that come with heavy gentrification. San Francisco was romanticized in the 1960's with its counter culture movement that was present in the Lower Haight. This peace-loving, anti-war movement was one of the many things that attracted so many individuals to San Francisco in order to find a place where they could express themselves freely and openly. However, with the rise of the technology industry in Silicone Valley and Salesforce's new skyrise building downtown, there has been an extreme housing shortage. The average private room in a shared five bedroom house in the outskirts of the city is $1000 per month with utilities not included. Many of the art spaces that have aided emerging artists have been shut down. However, these youths that are depicted in this photo series, while facing all these challenges, have chosen to stay, no matter the circumstances."

Ryan Koenig is best known for his photographs of subjects (people or nature) that emit emotions to the viewer. Having studied Art at San Francisco State University, Ryan Koenig was exhibited in six shows from 2011 to 2016, with the most notable being the Stillwell Exhibition that was hosted in San Francisco, California. The now Dublin based, mixed-media artist has also been published three times in 2017 for his photo series, “A Walk In The Woods” and has been working extensively with portrait photography in the last year. You can find examples of his work at https://ryandanielkoenig.wixsite.com/ryankoenig

Out of This Forest, The Northridge Review, Northridge, CA (book)

A Walk In The Woods, The Sutro Review, San Francisco, CA (book)

Out of This Forest, The William & Mary Review, Williamsburg, VA (book)

Back To The Future, FNA Fashion Show, San Francisco, CA 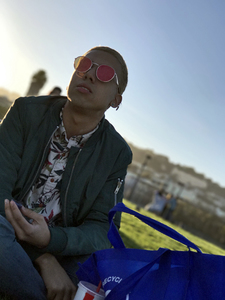 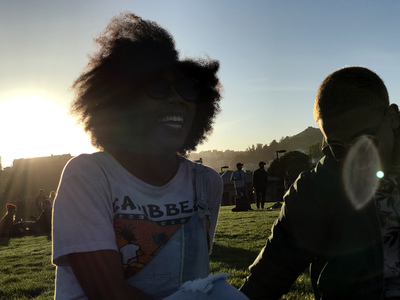 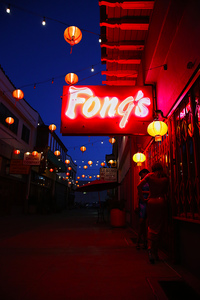 SameSource is a photographic artist with over two decades of professional experience recording images.  SameSource fine art photography spans both landscape and bodyscape, often exploring human sexuality and its relationship with art.

With recent showings from the Musée du Louvre, Paris, France, to Art Basel, Miami Beach, SameSource was recognized in the international Lumiere Award for 2017.  Coagula Gallery in Los Angeles included SameSource in its Ten Top Artists exhibition for 2016 in a show curated by Tulsa Kinney of Artillery Magazine.

SameSource work has been featured in The Huffington Post and American Photo magazine, and SameSource has twice been profiled by Silvershotz International Magazine of Contemporary Photography for the Apples and Apples Reinterpreted series.

SameSource says, " An additional note about “Chung King Road”: Throughout the 20th Century, the iconic Fong’s sign on Chung King Road in Los Angeles’ Chinatown was featured in dozens of movies and televisions shows, and it even served as the backdrop for the bestselling novel, On Gold Mountain.  In 2014, I had the honor and pleasure of shooting the very last photos of this location, just hours before the sign was removed at dawn the following morning."

SameSource has origins in the rural Midwest. After studying music and philosophy in a liberal arts education, the artist went to Italy and became immersed in the works of the Renaissance. A return to the US brought the pursuit of graduate work in music and cinema, with an eventual arrival on the west coast via the USC film school. In addition to the full-time pursuit of photographic fine art, SameSource output has included notable works as a recording artist, writer, and filmmaker. Learn more at SameSourceFineArt.com and follow SameSource on Facebook and Instagram; SameSourcePhoto on Twitter; SameSourcePhotography on SaatchiArt. 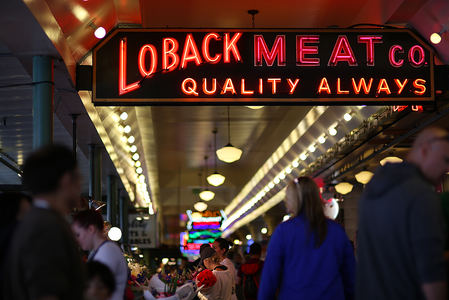 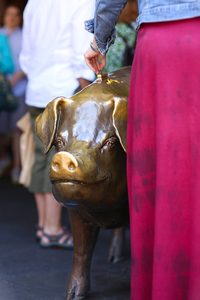 PIGGY BANK by SameSource
(Click on image for larger view) 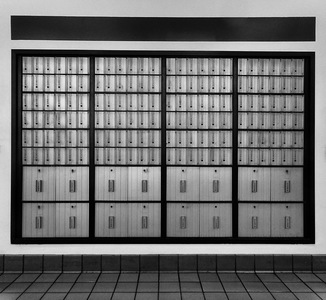 Stephen Anderson says, "I observe and comment on all aspects of life both mundane and profound...all we are is but a momentary number in a container we claim to be looking for love, but do we really know what that is outside our attempts to define it?

yes, we are wearing the same outfit..."

Stephen Anderson was born and raised in Southern California and has been creating artwork professionally since graduating from Cal State University Long Beach with a B.F.A. in Drawing & Painting / Intermedia in 1993.

He is the Current Executive Director for the Orange County Center for Contemporary Art (OCCCA) as well as the Visual Arts Coordinator at the OC Fair & Event Center.

Anderson was the featured artist in the September issue of Orange Coast magazine, and his artwork has been acquired by a soon to open Contemporary Art Museum in South Korea, and recently shown in a group show in Tokyo Japan. 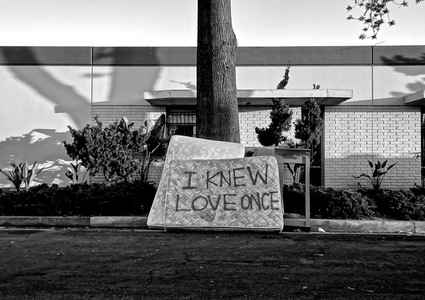 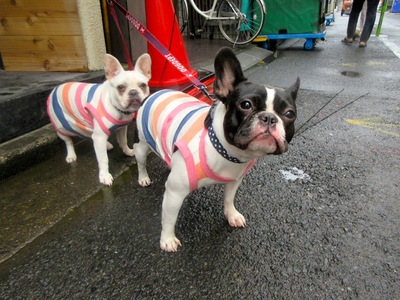 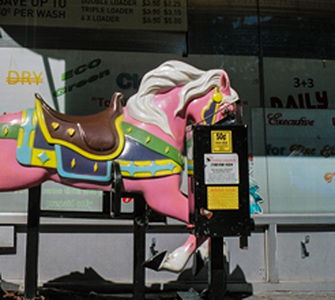 $.50 by Stuart Zalka
(Click on image for larger view)

Stuart Zalka,, born 1953, lives in Brooklyn, NY since 1976. He considers himself a serious amateur photographer since 1971.

He says, "In the project from which these photos come, I've used a plastic Diana F+ camera to find a new perspective on old icons." 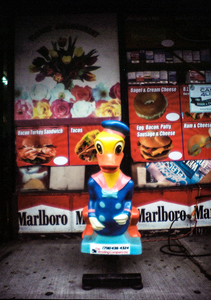 DONALD by Stuart Zalka
(Click on image for larger view) 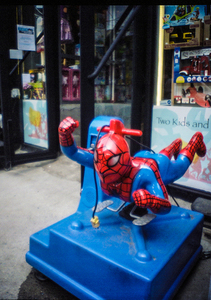 SPIDERMAN by Stuart Zalka
(Click on image for larger view) 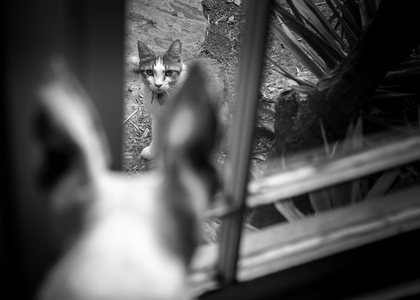 Travis Gordon says, "My collective body of work reflects a personal spiritual fascination of the world around us through all of its patterns, forms, and textures. These observations and candid moments of time have crossed over many genres and styles including landscape, street photography, and portraiture. A common theme throughout is that beauty can truly be found everywhere, particularly in the smallest details and in nature’s most fleeting moments. I aspire to create timeless memories and a sense of serene tranquility out of these often overlooked scenes, inviting the viewer to reflect and see the beauty emerge.

My passion for photography began nearly 25 years ago in my hometown of New Orleans. It was there that I first picked up my father’s old Nikon and began learning how to use it. This curiosity evolved into a formal education in the arts when I moved west to Los Angeles where I studied and earned a degree in photography from USC. Although it never became a full time pursuit, I continually cultivated my passion for photography gaining inspiration from some of the medium’s great masters.

Until recently, I have not publicly exhibited my work deciding to keep my passion a personal one. However, since 2016 I happily began exhibiting my photographs and am humbled to have been a part of numerous shows, exhibitions and privately held collections. Highlights include multiple shows and catalogues at Apero Gallery in Fullerton, Beyond the Lines Gallery in Santa Monica, Dab Art in Ventura,  as well as online exhibitions with Lenscratch and LA Photo Curator. Additionally, I have been a featured artist several times for YourDailyPhotograph.com as well as the social pages of Adore Noir Magazine and SaveArtSpace.org

I currently reside in Pasadena, California with my wife and young son." 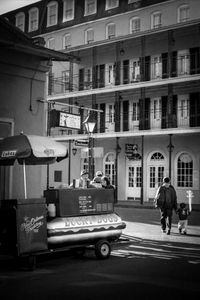 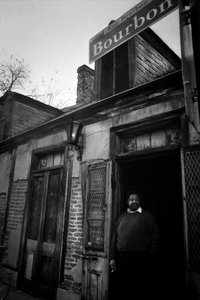