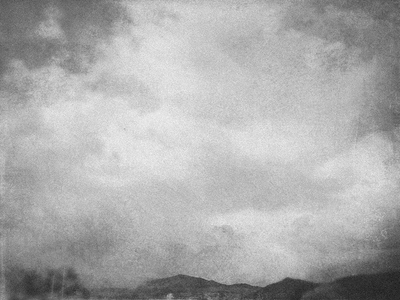 Adam Finkelston: "Leslie King’s image, 351 West Zia Road, is as light as a feather. The clouds that dominate the scene lift up our eyes and our hearts to heaven, transcending earthy pleasures for those of the spirit. The subtleties of the image are what keep me coming back to it; the cottony details of the clouds, the mountains below adding gravity to the scene, and the general bareness of the image, which suggests to me possibilities, not emptiness. It is altogether different than the 1st place image; light rather than heavy, soft rather than hard, ethereal rather than earthly, quiet rather than cacophonous. It is simple and delicate- and transient- as a dream."

Leslie King says of her work, "I was 22 when I first learned the word “transient.” At the time, I lived in Charleston, West Virginia, and according to friends, the word described the reason for the state of culture thriving in the capital city. Because people came and went continually, through their transience, they brought new ideas and passions with them that remained long after they left.

That night, as I drove out of town on an expanded road trip with another photographer, I pondered the word.

“Yes,” said my friend who watched me move six times in two years. And I suddenly found comfort in the notion. Nothing would ever stay the same, not even I. Life remained in perpetual motion no matter what, but maybe something of me would remain after I ceased my blood and bone existence.

Later as I joined the 9-to-5ers, my fascination with history grew. And sure, it was all the about the stories, but at the heart of it, what really caught me, was that big life-shattering events happen upon a place, and somehow time moved forward. I stood on battlefields where thousands died and yet, it could be a beautifully sunlit day, filled with peaceful thoughts. And then I wondered if that too was an illusion. If I looked farther into spaces unseen by others, through photography, would there be some residual energy changing the very atmosphere? Would I find some ethereal remains?

And this is where my series of images from Santa Fe comes into the picture. Though I am settled in southwest Virginia, I my heart is still transient. Places like Santa Fe call me.

“Wake up and pay attention,” they say.
And I eventually I do, putting miles between my comfortable studio and my aging body. I walk on storied lands, remaining ever restless, and only still when making images.

So my landscapes, tinged with these ideas, are about transient moments and atmosphere. The sun will never be the same. The grass will grow and die. Trees will fall. Yet here they are for a while, a moment preserved but not quite as I seek the residual energy. These are forever on paper, described in the gray tonalities of photography. The words drop away and grow quiet."

L.S. King, as a photographer and printmaker, gravitates to subjects that have a historical context, even if it is in the landscape. She is a visual storyteller and considers herself a modern Pictorialist. Her series have included subjects such as a botanical of flowers found in Pulaski, Virginia; historic sites in East Tennessee; remains of a WWII training base in Solomons, Maryland; and the John Wilkes Booth escape trail. Works in current process include the landscapes she experiences daily and an art book project about genetic memory. Her work has been exhibited throughout the East Coast, Colorado, Louisiana, and Tennessee including solo shows at the College of Southern Maryland’s Tony Hungerford Gallery, Glenview Mansion Gallery, Montpelier Cultural Arts Center, University of Charleston Art Gallery and Villa Julie College Gallery.

When not creating art or working, she blogs about the arts at theunwindingpath.com
Loading...