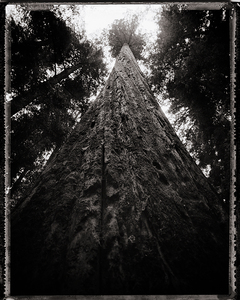 
Laurie Freitag: Michael, in reading about you and viewing your many wonderful series, two elements become apparant.

You see the world with the eyes of a poet and you also openly embrace imperfection.

I wonder where this insight about yourself came from. Was there something in your childhood that bred this sensibility?

Michael Kirchoff: Imperfection should be the name of my next exhibition! It would certainly follow along with some of the others I’ve done, like Fractured, Fractured View, or Flawed.

I definitely gravitate towards that aesthetic. I’m not sure where the poetic part comes from, other than preferring to imbue a sense of mystery in my work. I think about how one can most often not see what is going on in the shadows that surround us. I keep the shadows in my work very dark, with little detail, for that very reason.

To me that sense of mystery is part of what makes things intriguing. I prefer to let my imagination rule that world.

Our memories - well, mine at least, are quite imperfect. I’ve always preferred to take a slice of reality and apply a look and sensibility of how my darker and often askew mind works. To me, memories of places and events are a bit fuzzy, where parts of the scene are often obscured by distortion…sort of like looking through old weathered and broken glass.

If I try to psychoanalyze myself, I suppose that a fractured and less than secure family life as a child is where a fair amount of this comes from. There were always a lot of questions that I was not finding answers  to.

LF: Interesting!  Do you find with this viewpoint it's still possible to make work that is pleasing and fulfilling?

I wonder if approaching work from the 'imperfect ' viewpoint allows you carte blanche to break the rules. Meaning does this way of seeing your work ever get in the way or do you just trust the  process?

MK: I absolutely still find it pleasing and fulfilling. If the creative process were to ever stray from that, I would simply cease making work altogether. In a way I create the work to make myself whole. I don’t think of the process of making imperfect images as breaking any rules, as I don’t have any rules to break.

In a way then, yes, I suppose it does give me carte blanche, but again, it’s what I know. Making photographs is really nothing more than my own internal response to any given environment I’m working in. I may ruin the whole idea if I were to stop and examine what I’m doing while in the middle of working on something. I find it better to create as much as I can, and then let the images percolate for a while before coming back to them to view it all with fresh eyes. It’s a slow process, but I don’t see the need to rush through any of it.

LF: So we are talking about the importance of working organically. I like that you say that you create work to make yourself whole and that "Making photographs is really nothing more than my own internal response to any given environment I’m working in."

Working in this way can never disappoint. Your approach is very optimistic. I believe it's this inner pull that also leads you to  broader endeavors. Your latest project of giving back to the photographic community with Catalyst Interviews is exciting. Was there something specific that triggered this new direction for you?

I definitely would choose to be more optimistic rather than not. It’s not always so easy, and something that most people in the arts struggle with, so a specific effort has to be made to do so.

Sometimes we simply have to just challenge ourselves, and I believe that trying a new path tends to come with its own rewards. Even if we fail we learn from it. I’ve had plenty of failure and it was all good for me looking back.

I’ve also been lucky in that I’ve had the opportunity to work as an editor at BLUR magazine for four years now. That was new to me when I started, but I very quickly realized how much I enjoyed doing the research looking for talent to add to its digital pages. It was also the stepping stone I used to continue this path when I chose to launch Catalyst: Interviews. I had started conducting interviews with photographers, and again, I really enjoyed it, as I became more and more fascinated with the creative process.

My only problems were that I was limited to how many interviews I could do, and there was a decision making process between the founder and I about who would be featured. Because I felt so strongly about this part of my job, I wanted to do it more often than BLUR could allow. I was never held back, and its founder, Robert Gojevic and I see eye to eye on 99.99% of everything we do, which has really been amazing.

However, things are changing there, and since it only comes out six times per year, that’s where I would max out. C:I, on the other hand, will have a new interview, while also showcasing the images, every two weeks.

Catalyst: Interviews was born out of my desire for more. More knowledge. More inspiration. More art.

When I’ve done interviews myself (like now!) I find myself learning more about myself and my own process along with everyone else. I really like this fact, and I know others experience it too, so I wanted to create a venue that provided that. Everybody wins.

Also, the entire endeavor is a new challenge for me. I had to design an all new website, keep a regular schedule, and write more than I’ve ever done before. It has become another job that I’m trying to keep up with, but loving the entire process. If my heart had not been in this from the very first thought, I never would have taken it this far. The whole idea has plenty of room to grow if I wish too, which is great.

I should also note that when I was in the early stages of the project I received an email from a good friend, Michael Behlen, from the whole instant film community that I’m involved in. He was wanting to create a new magazine from the ground up, with a large online component, centered around the analog film and process using community. He was founding it, and he wanted me to be the editor in chief of this project as well.

Now, mind you, I was not so sure that I was going to find the time to do this with everything else I had going on. However, when my brain tells me, “are you crazy, there’s NO WAY you can pull this off”, my only response is, “yes, definitely, let’s freakin’ DO THIS!”. So yea, I’m a bit of an idiot. But a happy idiot….and now I get to work on Analog Forever magazine with Michael, and alongside Tim Scott and Niniane Kelly, who complete our dream team. That project launches very soon, on September 3. I’ll be the one chugging two large mugs of coffee when it goes live.

LF: Well Michael, you are a real inspiration! I can relate to 'more" and as creative beings it's hard to ignore that almost insistent child within that thirsts/insists for more.

Congratulations on staying true to yourself and saying yes to these opportunities that have come your way. Your audience are the benefactors of your vision.

Thanks for letting me pick your brain. I can't wait to see what you will do next!

MK: Next is jurying the ‘Our Dramatic Landscape’ exhibition for L.A. Curator…I can’t wait to see the submissions! More! :)

Thank you, Laurie, it’s been a pleasure.

You can find more of Michael's work at www.michaelkirchoff.com