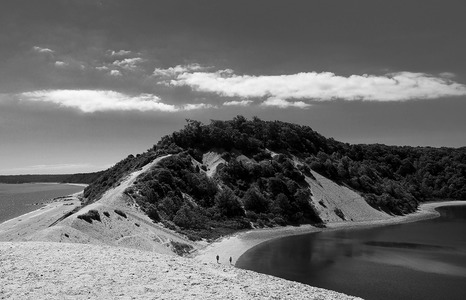 David Quinn says of this series,"'What Remains' captures the dramatically altered landscape created by the sand and gravel operations prevalent in Port Jefferson Harbor in the 1920’s and 30’s. At the time this activity was very controversial with some individuals heralding it as an economic boon while others attacked it as an environmental disaster. Now the man-made cove offers a safe haven for boats and the park offers a quiet refuge for hikers wishing to find a quiet beach and a view of Long Island Sound. Nevertheless, the remains of the abandoned foundation of the processing plant, the docks, and dredging structures are sobering reminders of how man greatly altered this natural environment.

Quinn says of his work, "Over the years, my interests have primarily centered on creating landscape and botanical images with an occasional venture into architectural and street photography. In many of my photographs I strive to evoke an emotion, raise an uncertainty or create a sense of movement either by isolating key elements or by blurring the subject matter. My work has been exhibited in over 125 shows in 15 states and Spain and Hungary."

Chosen for “Best of the Best” Emerging Fine Arts Photographers, 2014 by BW Gallerist