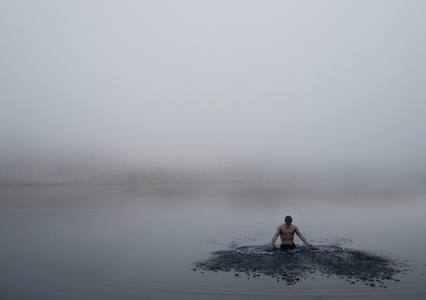 CURATOR JANE SZABO: "Against the quiet stillness of the landscape, this portrait is infused with physical rawness-both of the human form, and from the texture of the rocks, which seem to float above the water."
Studying photography at The University of Plymouth, Laurie began to create photography that illustrated his close relationship with place, space and nature. By putting himself into the images and placing physical interventions into the landscape, the photographs began to represent autobiographical connections to the places that were meaningful to him. The photographs are designed to question the nature of the sublime and the relationship between contemporary masculinity and histories of dominance over landscape.
For more info about Laurie Crayston go to:
http://www.lauriecrayston.com 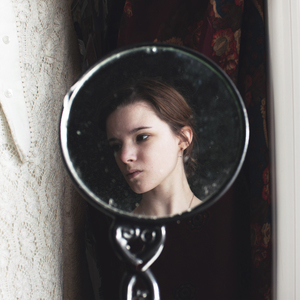 CURATOR JANE SZABO: "Though shot into a mirror, rather than looking at superficial details, Grace Clark's image "Vivian" is self-reflective, capturing the act of gazing inward."
To see more of Grace Clark's work go to:
http://www.graceclarkphotography.com 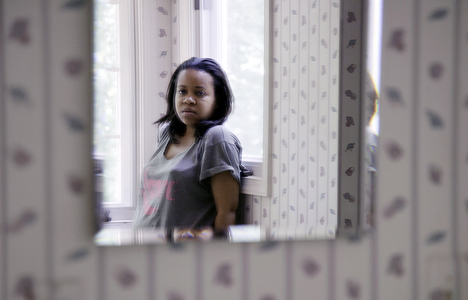 CURATOR JANE SZABO: "My final selection is coincidentally another image shot into a mirror, but the effect is quite different. The layering in the image creates a jarring sensation that might be problematic for some viewers, but was for me a strong asset, and I want to explain why. There are three things that I would like to point out. 1) The subject has moved her head, and there is a slight shadow of her face on the left known as motion blur. For some, that might make the image a failure. 2) Adding to that blur, we can see the face, and the back of the head and shoulder repeating in the beveled mirror. 3) We also see the room in front of us, and the room behind us. All these elements create a layering/repetition that I find quite compelling. On top of that, the raw honesty of the subject makes this a powerful self-portrait."
CARLA JAY HARRIS: "As the child of a military man, I spent my childhood in flux – moving every 2-3 years for the first half of my life. This pattern of transience continued into adulthood due to familial obligations, financial restrictions and indoctrinated habit. My work is made in direct response to my nomadic existence. Through photography, I am able to connect with permanence. I use the camera as an investigative tool to make sense of the ever-changing world around me. I am specifically interested in the relationships among environment and identity. My most recent works, center on explorations of social and political environments. American culture has constructed its own set of archetypes that dictate the ways in which individuals are marked and identified. I question the structure of these archetypes as well as who has the power/agency to dictate identity. I am also interested in photography’s role in affirming and reaffirming political realities."
For more info about Carla Jay Harris, go to:
http://www.carlajayharris.com
Loading...