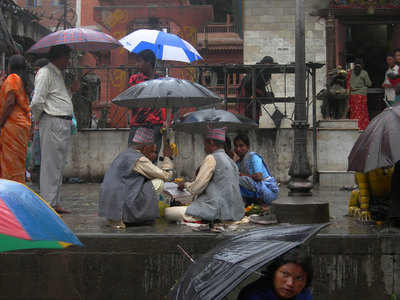 Curator Carl Shubs review:
"I loved your photo.  It has lots of winning elements.  In addition to the triangularity and circularity of the umbrellas, the wonderful expression of the woman at the bottom, the light on her face, her looking behind her, the point of her umbrella leading us back upwards to the group of men and their umbrellas, the pairing of the colors of the men’s hats, and the paralleling of the vertical lines of the center umbrella’s shaft along with the lamp post and the scaffolding, there is also the layering of foreground, middle ground, and background, each of which has its own separate activity going on, and together they make a great interplay.

In post, did you consider cropping out part of the right side of the photo to make it tighter (as below)?  While it would have lost one more of the umbrellas, I think it would have tightened up the composition in several ways.  It would have put the woman in the corner, and she’s such a powerful element because of her facial expression and her looking backwards (redirecting the viewer’s eye back towards the left of the photo where it would start the circle of umbrellas all over again).  It would also have more strongly set an anchor for her as a corner of the umbrellas.  If you had cut off part of her umbrella, as I did, it would complement the cut off umbrella on the left (which I like) and also provided a vertical line to complement the line of the lamp pole and the scaffolding (?) beside it.  Without the crop, you have the benefit of the added umbrella but there’s not much else past the woman’s umbrella of interest, so it seems like not much of a loss considering how much would be gained by the crop. With all that said, you have given the viewer a lot to keep us busy looking at and returning to.

Mykel Rose responds, "When I'm in Kathmandu, I usually spend a portion of my day wandering the streets and passageways with my camera(s). When something catches my eye, I'm quick on the shutter. However, at times, when I see something interesting  I will wait for the right moment to shoot. In this shot, the rain had just begun, and I spotted this particular group as they were unfolding the umbrellas. As I took the picture, the boy in the bottom right darted past the camera, so in some ways, it's a combination of pinpointing a scene and happenstance.

It's interesting that you've commented on the framing and I agree with you on the critique.  I submitted the original uncropped version for the competition, but I also have a cropped version done soon after I took the photo. I've included this in the email. As you can see, I've trimmed off a bit on the right side of the picture but left the figure in the red sari and some of the umbrella which I feel helps to balance the composition. Is this what you had in mind?
I hope this answers your questions and please let me know if you need anything else from me.

Thank you again for your comments and critique!"

Additional review by Adam Finkelston (Owner, Publisher, Co-editor, The Hand Magazine)
"Mykel Rose's image, "Rain", is striking to me for it's complex and rhythmic composition. The eye moves from umbrella to umbrella, and from face to face, following curves and lines, gazes and gestures; bouncing back and forth, in and out, up and down. This visual motion parallels the commotion of the chaotic street. The rhythm of the eye harmonizing with the rhythm of the rain falling, the cars honking, the voices and footsteps falling and rising. It is a lyrical image, befitting the drama of lives colliding and interacting with one another."

Additional review by Steve Grody. (Author Graffiti L.A.: Street Styles and Art)
"Nice “slice of life” shot, but also interesting compositionally as the strong horizontal grid of architecture is randomly interrupted by the rhythm of the figures. Note how important the bottom figure is in terms of anchoring the shot."

After three years of fine-tuning my design/ illustration techniques, I moved to Europe where I illustrated magazine stories and book covers for well-known publishers in  Germany and Switzerland. Later, I relocated to London to work on an
animated feature and begin a new life chapter.  My next career stop was New York, supervising the background
department at a large animation studio in Manhatten.

Eventually, my career took me full circle, and now, once again, I am in Los Angeles where I art direct for studios both here and abroad.  When I'm not working in
animation or producing my projects in LA, I roam the world.

Photography and painting are my traveling companions, which allow me to record my thoughts in a visual diary."