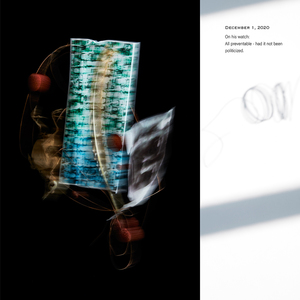 ON HIS WATCH by Beth Galton
FIRST PLACE

Curator Fran Forman says, "This image is one of a series of powerful images that illuminate the anxiety, fear, chaos and politicization of the early covid crisis. Indeed, it was difficult to select  just one image from this remarkable series. Each image, strongly composed, suggests the contradictory and confusing information leading to fear and isolation in the early months of the pandemic. The black field suggest the sense of the unknown, the fear and power of the disease.  The swirls, motion, and blurring are strong visual metaphors for the lies and disinformation that exacerbated the global scourge.

Placing text on an adjacent page and the layout of each image, as in a diary, illuminates how each day seemed an eternity, each day a frightening or conflicting message from national figures as well as musings from the artist and others. The title “On His Watch” I assume suggests that the pandemic affected so many hundreds of thousands of Americans because former president Trump had publicly chosen to lie and disclaim its severity. The fact that over a million of Americans have perished - and I suspect this number is undercounted - is a permanent stain on our national conscience.

This particular image, On His Watch, includes only one item that could be associated with the pandemic: the mask. I see the cherries as symbolic of the blood that the virus often attacked. Other than the feather, the other objects are unclear and therefore open to the viewers interpretation, of course, I would ask the artist why she used the feather and the other objects.

I’m curious about how you selected the specific items in the image. What is the significance of the cherries, of the feather?"

Beth Galton says, "The red cherries are actually dried lychee nuts and played an important role in this series. I felt they visually resembled the illustrations I had seen of the virus and worked to symbolize the onslaught of the disease we were battling. Though I appreciate Fran’s interpretation of it representing blood, either interpretation relates back to my feelings about the virus and how deadly it is.

The feather and bird carcass represent death and the fragility of life. Birds, with their hollow bones are fragile things, and that seemed appropriate to illustrate how vulnerable we felt in the face of this deadly virus.  Although much of my work begins intuitively, creating the effect of the transparent feather in the middle of the page of images of deceased covid patients spotlighted this fragility.

Other elements: Sometime in late October/ November 2020, news articles were being published online with photographs of people who had died from the virus. I screen grabbed these images and created a document which I printed on vellum. This is the main image, which is blue and green. The paper on the far right is a photo of Trump cropped and inverted in photoshop, then printed on the vellum as well."

Q:  What are the elements you used?
A:  In this photograph I used wire to suspend the paper, feather, lychee nuts and bird carcass all shot against a black background. By suspending it in wire, my intention was to create a contained portrait of my emotional feelings of that moment.

Q:  Was the movement created in-camera or composited?
A:  By using motion, I could illustrate the anxiety and lack of control the pandemic was causing me. Using a long shutter speed, and moving the suspended objects accomplished this effect. It is a simple technique that I spent hours experimenting with until I achieved the amount of blur that I wanted. Although some of the images in the series were composites this image was not.

Q:  And what is the significance of the date, December1?
A:  This image is a part of a series that I constructed which has become a diary of that time. I’ve attached a pdf so you can see it in context. Thus the date Dec 1, 2020 was written in response to the national death toll- it had risen to 270,000 and we were averaging 1,500 reported deaths per day.

Q:  And lastly, how do you think these specific objects relate to the polarization of the pandemic in this country?
A:  This photo comments on how many people had died, I felt due to the politicization of the pandemic because of Trump. If we had only been united as a country, the death rate would not have been so high. This politicization cost so many people their lives and still does.

Artist statement: Covid Diaries
Beth Galton says, "This is an ongoing project about the Corona Virus. I have struggled like everyone with the magnitude of the pandemic-how it has insidiously spread and wreaked havoc around the globe. In March, while the virus began its universal spread, my world in NYC became my apartment. I knew in order to keep safe I wouldn't be able to access my studio, so I brought my camera to my home and constructed a small set next to a window.

I began my days looking at the NY Times and Washington Post online, hoping to find a glimmer of positivity. What I found and became obsessed with were the maps, charts, and headlines, tracking Covid-19’s spread. I screen grabbed and printed them out to see how the disease had multiplied and moved, soon realizing that each of these little visual changes affected millions of people. These charts were highly analytical, leaving out the immensity of the emotional toll of those affected. It became apparent that I had to use them in my photographs, to help me process this devastating experience. ⁠

With time, photographs of the vast number of people who had died began to appear in the news. Grids of people’s faces filled the screen; most having passed alone without family or friends beside them. As the virus moved through our country, many of our political leaders refused to acknowledge the dangers that it posed creating devastation and death. The incredible loss and the politics of this period was incorporated into these photographs.

⁠This series began in March 2020 when NYC was the epicenter of the pandemic. It is a reflection of my emotions and thoughts through the past year and a half. By photographing this data and images, combined with botanicals, my intent is to speak to the humanity of those affected by this epidemic.  Motion in the images was utilized to help convey the chaos and apprehensions we were all experiencing. Once assembled, I now see that these images are a visual diary of my life with Covid-19; the politics of the time and the way it has affected our everyday lives."

Beth Galton is a photo-based artist, with an educational background in the natural sciences and three decades of experience as a professional photographer in the editorial and commercial arena. These elements of her history are the lens through which she explores the world. Collecting objects, allowing time to affect botanical matter, these are the tools Beth uses to construct still life portraits. The stories speak to the cycles of nature, our connection to aging and mortality, and the fragility and resilience of the human experience. As a lifelong learner, Beth uses current technology to help articulate her message. She loves to harness natural light to capture the compositions by using a large format camera and digital back.

Beth’s fine art and professional work have won numerous accolades and been exhibited extensively throughout her career. Several of her personal projects have gained national and international regard.Beth lives and works in New York City, where she is moved and inspired by the city every day.

Both Beth’s professional and fine artwork have won numerous accolades and have been exhibited extensively throughout her career. Her Cut Food series received awards from the Art Director’s Club, PDN- Taste awards, Graphis, International Photography Awards, APANY, APA National and was covered in the press by Epicurious.com, Time.com, Washingtonpost.com and NPR to name a few.  Amongst others, her work has been shown at Aperture, Milano Art Week Ode to Food, The Fence, Wave Hill, Praxis, FMoPA, SE Center for Photography, Griffin Museum and at MOCO in Montpellier, France. Her Covid Diary images is being turned into a book published by Fall Line Press next year.

All Images for sale: