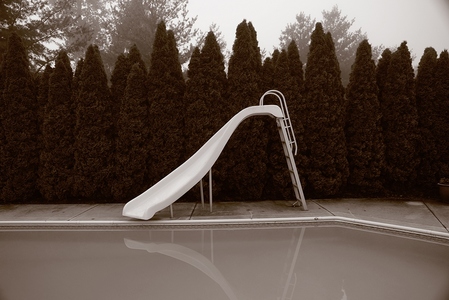 Curator Bree Lamb says, "I appreciated the directness of this image.

The depth of the tonal range and the precise control of exposure accentuates the compositional elements within the frame.

The slide leads the viewer into the pool, and the trees and reflection help to balance and stabilize the frame."

Gary Beeber says of his work, "Growing up, I loved the paintings of Edward Hopper and the photographs of Diane Arbus, Walker Evans and Eugene Atget.

I started out as a painter. I painted little photo-realistic watercolors based on my photographs, but eventually stopped painting altogether and concentrated on photography.

For many years I photographed architectural details and landscapes. Later on, after producing and directing three documentary films and an off-Broadway burlesque show, I became interested in taking pictures of people. I am fascinated with people who live unconventional lives.
As a photographer, I love immediacy and the thrill of exploration. I am currently working on several projects."

Gary Beeber is an award-winning American photographer/filmmaker who has exhibited in galleries and museums throughout the United States and Europe.

Beeber’s work has been included in juried exhibitions throughout the country. Among Fortune 500 companies who collect his work are Pfizer Pharmaceutical, Goldman Sachs and Chase Bank. 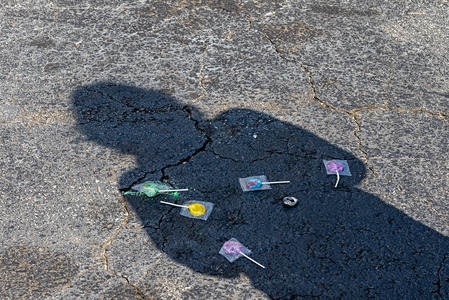 Curator Bree Lamb says, "Noel’s use of the frame within the frame initially drew me to this image.

The small pops of color add vibrance and give the photo a greater depth. Noel plays with the contradicting two and threedimensionality of the photograph in a way that’s engaging and humorous."

Laura Noel says of her work, "I look down because there are treasures here, but also the means to trip and fall."

Laura Noel’s work often explores issues related to cultural trends and public policy such as the move to a digital society, bans on public smoking and so forth, as well as aspects of her personal history.

She was a 2015-2016 Walthall Fellow at the WonderRoot Arts Center and recipient of a 2016 Idea Capital Grant. Her work is in the collection of The High Museum of Art, The George Eastman House, The Ogden Museum in New Orleans, North Carolina State’s Gregg Museum of Art and Design, MOCA GA and a number of private and public collections.

She received a BA in Public Policy Studies from Duke University and a MFA in Photography with Distinction from the University of Georgia.

Her prints been featured in exhibitions at the Pingyao International Photography Festival in China, the Contemporary American Photography exhibition at the Internationale Fototage Festival in Mannheim, Germany, Gallery 24 in Berlin, United Photo Industries in New York City, The Rhode Island School of Design Museum, The Cleveland Museum of Art, The Museum of Contemporary Art Georgia, Jackson Fine Art, Lumiere, Davis Orton Gallery in upstate New York and Gallery 1401 in Philadelphia.

Her artist books are in the collections of the International Center of Photography library in New York, the Beinecke Rare Book & Manuscript Library at Yale University, the Savannah College of Art Design’s ACA Library of artist books, The Houston Museum of Fine Art, The Cleveland Art Institute, The Harry Ransom Center at the University of Texas and many private collections.

Recent installations include a commission from Atlanta Celebrates Photography and the Metro Atlanta Rapid Transit Authority  to convert a subway car into an art gallery called Kaleidoscope, To Do at the Spruill Gallery, The Enchanted Forest of Books on the Atlanta Beltline, Give/Swap/Receive at Emory University, and The Empathy Experiment at ArtFields 2017.

Noel works as a photographer and arts writer. She has also taught at Emory University, Kennesaw State University, and Oglethorpe University in Atlanta. 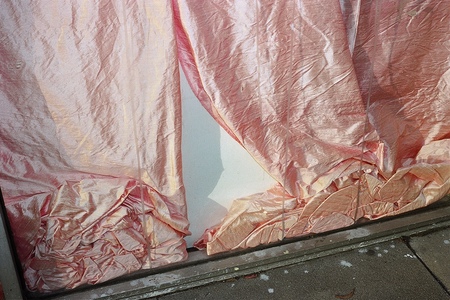 Curator Bree Lamb says, "The color, texture and luminance of the pink fabric in this image grabbed me immediately.

The subtle shifts of tone and saturation within the clean tight frame keep the image interesting, while the perspective and inclusion of the ground add depth and stability to the image."

Beth Herzhaft says of her work, "'The Indecisive Moment' is a series of contemporary photographic landscapes.

The subject matter I gravitate toward is unspectacular, and the images are a mischievous reaction to “epic” photography.  In these images there is no “decisive moment”: what is captured  is a comma rather  than an exclamation point.

Through the juxtaposition of spatial elements, use of color and light and choice of subject, a "discovered" narrative emerges, highlighting incompleteness as a condition of everyday life.  This series is an exploration of the ephemeral, the images framed to appear incidental.

There is a tension between meaning and meaninglessness that is expressed in the work.

In these images there is a sense of idealism and anxiety (albeit a humorous one), with both the beautiful and the absurd coexisting in an uneasy truce."

She has been a freelance photographer since the mid-1990's, working with numerous publications, advertising agencies and
record companies. The rest of the time she is shooting fine art.  She maintains a studio in Los Angeles, CA.

Beth is influenced by everything from Richard Feynman to Mavis Staples.  She deeply loves what she does, both in fine art and commercially. 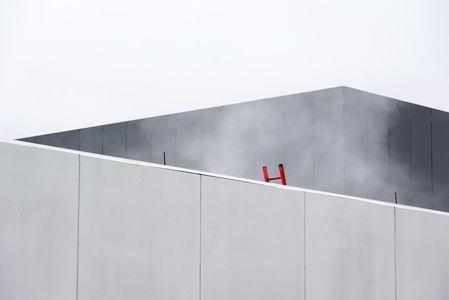 Curator Bree Lamb says, "The apparent three-toned split of this image and use of line are really strong in Levinson’s photograph.

The strong perspective and addition of the fog or smoke in the foreground adds interest. The pop of the red ladder works well, helping to give the viewer a sense of scale and a resting place within the frame."

Mark Levinson says of his work,"'Extracts of the Ordinary', I believe that the ordinary, when viewed through the lens of a particular imagination, can reveal surprising outcomes.

I love to search out odd and curious fragments of commonplace scenes that normally go unnoticed, and capture them in images: the top of a red ladder peeking into an abstract architectural tableau; the shadow of an enormous flag peering down on an unsuspecting newspaper reader.

Some are just odd or overlooked snippets of our surroundings.  Some of them are unexpected juxtapositions that appear to me, often fleetingly.  Others show eccentric artifacts of the real world--I have only to see them and aim my camera.

Taken together, these images may seem to depict a strange reality.  But they are really just reflections of the domains we inhabit every day."

Mark Levinson is a photographer living in Lincoln, MA.

During a long career in high-tech, he has remained passionate about his photography, pursuing a personal vision of the urban and natural world.

Levinson’s work has been exhibited in many local shows, including the juried Mass Art annual Spring auction and the Photography Atelier at the Griffin Museum of Photography, Winchester, MA.

He has photographed extensively for the Sudbury Valley Trustees, a Massachusetts land conservation organization. Many of his landscape photographs of SVT properties have appeared on their web site and in their publications, and have been important aids to their conservation efforts. 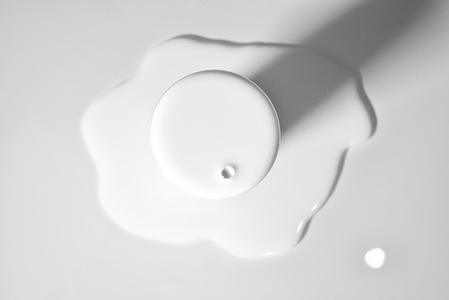 The direction of the shadow helps to orient the viewer and the soft organic shapes and repetition of circular forms work well to create a simple, dynamic image."

Catherine Marcogliese says of her series 'Domestic Disasters, 2016', "This series came about while I was working on my show Whiter than White (Domestic Landscapes), which touches on the memories I have of my mother’s role as housewife and mother during the fifties and sixties, and how I, in turn, attempt to balance domesticity with artistic creation.

The result is a very personal narrative using images from my everyday life as subject matter for my photographic work. And therein lays the challenge:  how to produce, and how to find meaning in the banality of the everyday?

The series Domestic Disasters aims at addressing these questions by imbuing images of common household incidents with a sense of drama and mystery. The ordinary becomes something more, ennobled by the photographic process. The result is that the incident is blown up out of proportion, making a mountain out of a molehill, or something out of nothing."

Canadian artist, Catherine Marcogliese, started her artistic career in the field of painting after having obtained a BFA in painting and art history at Concordia University in Montreal (1979). Since her arrival in France (1988) where she now resides, her work has primarily been concerned with the definition of the notion of the “real” in visual representation. Early on this involved integrating 3 dimensional objects in her works, but later, with an obvious logic, she turned to photography.

Today her work is primarily photographic in nature, albeit, reworked digitally. In conserving the plastic elements of painting such as form, line or colour, etc., she is able to manipulate her images in an attempt to push photography beyond a straightforward narrative representation towards a work which is more abstract and personal.