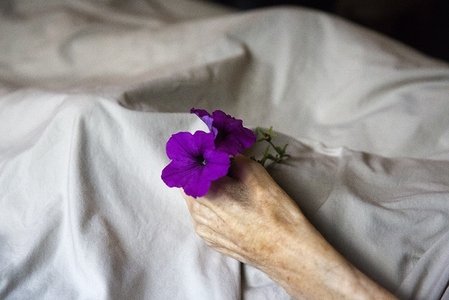 Review from curator Jane Szabo:
"Nina Weinberg’s image Doran Transition and Diane Fenster’s Flores Para el Muerto stop time for a moment. I love the contrast between the two images. Weinberg opts for lush color and clarity and seems to celebrate the beauty of a life, while Fenster’s soft focus black and white image creates a quiet memento to a life just passed."

Nina Weinberg Doran says,"It begins with a racing heartbeat, when I spot something out of the corner of my eye that I know I have to photograph. In an instant I’ll propel myself out of a moving car or turn down a path in the opposite direction because I am magnetized – stirred in such a way that there is nothing else I can do.
I see myself as a rubberband, always stretching to see anew, to find different ways to express what I feel through my camera. My work spans fine art, social documentary, street photography, and environmental portraiture. Some images are responsive, others compositional; I am not confined to any one style. The thread that runs through my images is the essence of who I am and where my heart lies.
I begin with a moment that makes me tingle. It might be a woman clutching a rooster from a broken down truck, or a small plastic doll face down on a sandy beach. My photographs reflect different sides of myself, but they’re always about connection: the emotional dialogue that takes place between me and my subjects, the nuanced bonds that affirm what is familiar to us all rather than what sets us apart."
It wasn’t until the age of 46 that NINA WEINBERG DORAN, a self-taught artist,discovered her passion for photography. Based in New York, she has shot in the Caribbean, Guatemala, Morocco, Mexico and the streets of New York City. Her work has been exhibited in solo and group shows at museums and galleries including the Griffin Museum of Photography (MA), Umbrella Arts(NYC) A Smith Gallery(TX), SxSE Gallery(GA), Lightbox Photographic Gallery(OR),PH21Gallery (Budapest), Center for Fine Art Photography (CO), Center for Photographic Art (CA), The Half King (NYC), Dark Room Gallery (VT),  AHM Gallery (VA), Eyebuzz Gallery (NY). In 2013, she was included in Rising Waters: Photographs of Hurricane Sandy, an exhibition at both Governors Island and the Museum of the City of New York, a collaboration between the Museum of the City of New York and the International Center of Photography.

In 2011, she received an honorable mention in the Robert Cornelius Portrait Award competition and in 2017 won the Julia Margaret Cameron Award competition for nudes; her work is included in the Julia Margaret Cameron Award’s “A collection of works by women photographers”. She is currently developing a body of work exploring the concept of stillness
RECENT HIGHLIGHTS:: winner of nude figure category Julia Margaret Cameron Award. Also in this October 2018 Barcelona Biennale
Image -Transition
The last eye to eye contacts, followed by the final shallow breathes .....  heat turns to cold...  a flower is placed by someone in his hand, as he transitions into the next realm ..  life and death, beauty in sadness.
www.ninaweinbergdoran.com 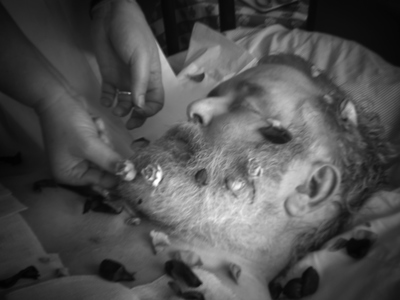 Review from curator Jane Szabo:
"Nina Weinberg’s image Doran Transition and Diane Fenster’s Flores Para el Muerto stop time for a moment. I love the contrast between the two images. Weinberg opts for lush color and clarity and seems to celebrate the beauty of a life, while Fenster’s soft focus black and white image creates a quiet memento to a life just passed."


Diane Fenster/Asleep in the Arms of Morpheus. Fenster says, "I was invited to be one of five women who witnessed the final two days of a dear friend’s life and prepare his body after his death on the third day. During this time, I was also kindly given permission to photograph the process in between my times actively assisting.

There are two sets of photographs concerning the death of my friend. One group of photos are of his life as he lay dying, sleeping away his final hours, dreaming whatever dreams the administered soporific gave to him. They are also about the care and love given him as he faded. They capture a light that lurked beneath his flesh, as his blood still flowed slowly in his veins, and his breath became shallow. The second group of photographs were taken after his death.

As I pondered these images I wondered if you could see the difference between the life and death images. Did they record some fleeting difference? They also witness the process of how his family and friends honored and loved the person now stretched out naked before them, ready for oil and scent, for prayers and protection, for flowers and a swath of cloth. There was this magnificent and powerful intimacy that cannot be measured. Once you have washed the dead, death is experienced differently.

This series has a direct relationship to the post mortem photography of the late nineteenth and early twentieth centuries when death often occurred at home, not hidden away in nursing homes or hospitals and the photographs were cherished mementos of a departed family member.

I view myself as an alchemist, using alternative process, antique photographic methods, toy camera and digital tools to delve into fundamental human conditions and issues. My work is literary and emotional, full of symbolism and multiple layers of meaning with a style that marries photography with evocative and fragmented imagery. I am currently exploring several antiquarian processes including lumen printing and photo-encaustic.

My work (exhibited since 1990) first received notice during the era of early experimentations with digital imaging and has appeared in numerous publications. I have been a guest lecturer at many seminars and conferences. My work has been internationally exhibited and is part of museum, corporate and private collections.

Finalist in both the Fine Art and Nude & Figure Categories of the Second Charles Dodson Awards. MOSCOW PHOTO AWARDS Honorable Mention for the What We Leave Behind series. Honorable Mention 2018 WOMEN SEEN BY WOMEN, A SPECIAL EDITION OF THE JULIA MARGARET CAMERON AWARDS. 2016 POLLUX AWARDS, Finalist in the Alternative Process category.

Recent exhibitions include NATIONAL PHOTOGRAPHY FELLOWSHIP COMPETITION - DEVELOPED WORK, Midwest Center for Photography, Wichita, KS for my HY•ST•ER•IA: Body as Battleground series. This exhibition features current and relevant work of sixteen national photographers that are helping define the pulse of contemporary photography in the United States. Included in ALL ABOUT PHOTO Magazine first issue LIGHT, selections from my Midnight Mysteries series. EXPANDING BOUNDARIES, Los Angeles Center of Photography, FACES at SITE: Brooklyn, FotofFoto gallery’s 13th National Competition, Let There be Light and Shadow at the Umbrella Arts Gallery in New York, Photography as Response at The Center for Fine Art Photography, Intimate Portraits exhibit at the SE Center for Photography, The Essence of Monochrome International Photo Competition sponsored byThe Stockholm Diary and exhibited in Budapest, SohoPhoto Alternative Process exhibit at the SohoPhoto Gallery in New York and recently received an Honorable Mention in the LAPhotoCurator competition THE TANGIBLE PHOTOGRAPH juried by Blue Mitchell.

Also included in included in the Illuminate exhibit curated by Elizabeth Avedon, the Alternative Process exhibit juried by Christopher James at the Center for Fine Art Photography.