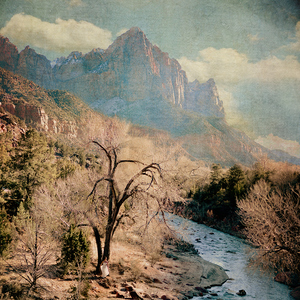 Virginia Smith says of her work, "I am in awe of the vast landscapes to be seen in the American Southwest.

Views that open up after a journey to find them.  Finding inspiration in the 19th century American Landscape Painters who brought these newly discovered views to ordinary people as well as the spirit of adventure that moved some to see for themselves these places that caught their imagination.

They were not disappointed and I have never been, returning again and again to experience the rugged beauty of mountains, deserts, rocks and fauna, the deep velvet starlit nights, the sounds of water and birds as well as the rustle of the brush as I walk through or the sound of the sand at my feet from the weathering of the ages on the rocks.

In these images, I imagine these views as seen through the visitors of the last century and a half in the paintings that captured their imagination as it captured mine before I could make my way to them.

Vintage inspired Plein Air Photography worn and weathered by the memories over time.  I photographed and created the textures for my images with the things people took to these places.  The old stained canvas of a tent, a rusted canteen, old pages from a travelers journal.

The ongoing themes of searching for beauty with great effort is in every aspect of my work no matter the subject.

I observe and notice what I see through the lens of history in the stories I’ve been told, the books I’ve read, the museums I’ve visited.  I can listen, interpret and tell these stories in images reflecting back to how the ordinary people over time saw it.  It is the work I will do as long as I can hold a camera."

Virginia Smith attended the Anderson School of the Arts in Aspen Colorado and learned the basics of photography from Jay Maisel and mentored by the late Ernst Haas for a summer.

She came home to Los Angeles eager to pursue her newfound love of the craft.  She was refunded money to her next workshop at a camera store and told to go home, pick fruit and have babies.

The 70s was a difficult time for a Mexican/Indian woman to have a career in photography so she made do photographing friends, family, anyone who she could put in front of her camera.

A period of homelessness destroyed all her negatives and images and her camera was stolen.

When her daughter decided to become a photographer she asked her mother to join her.  Her long repressed joy for the craft was renewed and Virginia has been busy ever since again photographing anyone she can put in front of her camera as well as personal projects born of the need to tell stories, share emotions and express creative ideas.

She has continued to educate herself in improving her skills attending a Film Is Not Dead with Jonathan Canlas as well as working with Mentor Don Giannatti of Lighting Essentials in the art of lighting and commercial work.

Virginia's work has been featured in international publications and media as recognition in competitions. Her styling work for other photographers has also been featured in wedding blogs and magazines as well as her images. 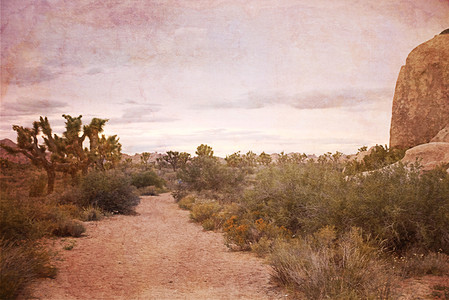 PATH TO RUIN AND DAMNATION, JOSHUA TREE by Virginia Smith
(Click on image for larger view) 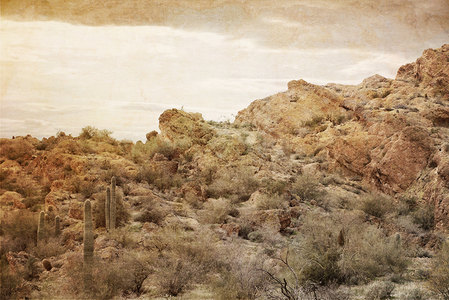