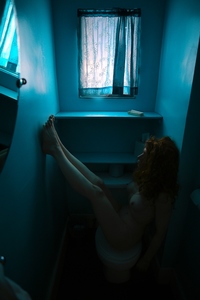 BLUES FOR AIROM by SameSource
SECOND PLACE
A nod to the king of gestalt, Om Bleicher. Model Cat Schrodinger.
(Click on image for larger image)

SameSource is a photographic artist with over two decades of professional experience recording images.  SameSource fine art photography spans both landscape and bodyscape, often exploring human sexuality and its relationship with art.

With recent showings from the Musée du Louvre, Paris, France, to Art Basel, Miami Beach, SameSource was recognized in the international Lumiere Award for 2017.

Coagula Gallery in Los Angeles included SameSource in its Ten Top Artists exhibition for 2016 in a show curated by Tulsa Kinney of Artillery Magazine.

SameSource work has been featured in The Huffington Post and American Photo magazine, and SameSource has twice been profiled by Silvershotz International Magazine of Contemporary Photography for the Apples and Apples Reinterpreted series, and is one of 25 international artists featured in the magazine’s 2017 Folio of Fine Art Photography (ISBN: 9781642049985).

SameSource has origins in the rural Midwest. After studying music and philosophy in a liberal arts education, the artist went to Italy and became immersed in the works of the Renaissance.

A return to the US brought the pursuit of graduate work in music and cinema, with an eventual arrival on the west coast via the USC film school. In addition to the full-time pursuit of photographic fine art, SameSource output has included notable works as a recording artist, writer, and filmmaker.