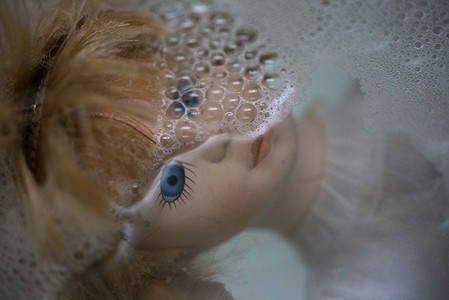 Curator Adriaan Van Der Plas: "Soap bubbles have for centuries been allegories for the fleeting nature of life.  Blayne Macauley multiplies the metaphor here by depicting a lifeless doll, rather than a human, with nose and mouth under water – the discarded object drifts like a distant memory of the beauty of our natural world.

How is this picture representative of the human relationship to water? Is this a visual metaphor?

Blayne Macauley: "To be honest, my father drowned last fall, and this image is about him.  He was alone on his boat when he drowned, and the thought haunts me.

My dad spent his entire life in love with the water.  He owned a boat here in Georgia, but also took boat trips all over the world.  His favorite activity was sitting on a boat looking out at the water.  He was completely mesmerized by it.   In the end it took his life.  This photo is about human being's inability to harness and control nature."

Blayne Beacham Macauley began her arts education in Atlanta at The Westminster Schools.

In 2001 she studied oil painting in Venice, Italy at the Scuola Internazionale di Grafica.

She studied photojournalism and painting at Boston University.  She has worked
as a photographer and artist in Atlanta since 2006.

You can find her work at www.blayneart.com

Additional reviews-
Curator Steve Zmak: "What an imaginative and illustrative way to portray this theme! It’s a striking and original image that grabs your attention for its unusualness, and captivates by allowing the viewer a wide palette of personal interpretation.

Is the artist critical of the relationship between humans and water, or comforted? Every viewer will have a completely different answer, and even more questions. Very thought-provoking—exactly what good art is all about."