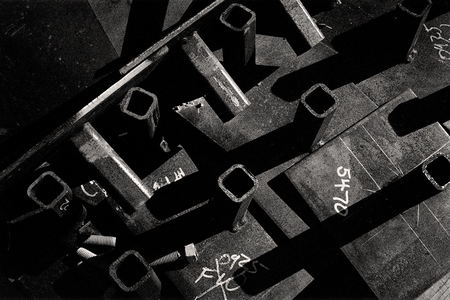 Sandrine Hermand-Grisel says of this image, "There were so many images of texture that dealt with pattern and repetition and layers...but there was one that wasn't like the others. This one, the one I selected for first prize, seemed to be like a Modernist photograph, like something that would eventually influence the Bauhaus school: an image of iron stands with some writing on them set in the blazing sun carelessly and yet somehow arranged simultaneously.

This particular picture reminded me of a lesser known Ruth Bernhard photograph, the abstract photograph of the Life Savers candies standing on end casting shadows and indeterminate in size and scale. In the early twentieth century, photographers began producing images that were sharp in focus and had an emphasis on form, unlike the Pictorialists. They also starting using the camera as more of a mechanical and technological tool as well. I came across this simple and abstract image of a pile of iron stands revealing squares and rectangles with long black shadows cutting across the frame and I thought of some of the great photographers of the past and so this image resonated with me. Not just for the different way that the artist saw and captured this subject, but for the fact that the photograph itself conjured up the explorations, interests, and concepts of the Modernist photographers for me. I very much look forward to seeing what this artist will create next!  Hermand-Grisel asks, "Where did you take this photograph and how did the idea come up to photograph this?”
Mathias Sweet says, "The sky was clear, the weather agreeable, the morning crisp. With camera on my shoulder I came upon a late stage construction site with an assortment of materials stacked and strewn about.
I took this photograph for the same reason I take any photograph now, I had to. It was something that I needed to get out of me to prevent the restless leg syndrome of my mind.  In the past I’ve hopelessly attempted to emulate the photographers I loved and the photographs that inspired. In doing so I created a conglomeration of mediocre, uninspiring, haphazard photographs.  Now I photograph what compels me to photograph, only this.  I photograph light, shape, texture and line if for no other reason than to share what and how I see."

Mathias Sweet (b. January 28th, 1987) says of his work, "For over a decade I have photographed a variety of genres, including weddings, portraits, restaurants, and real estate.

Having finally settled on what moves me most, the often overlooked mundane aspects of everyday life, I handprint all my black and white film allowing me to best articulate my vision employing the elemental, and romanticizing the prosaic."
https://www.mathiassweet.com 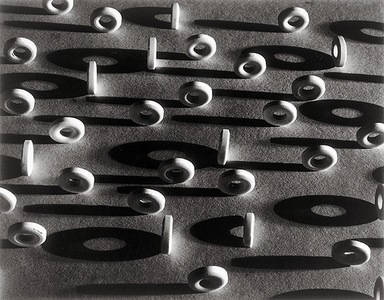