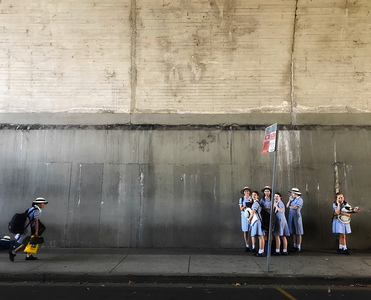 You stood in just the right place to have the sign post split the group of girls behind it.  And it does so with an angle that adds another dynamic with the group.
You also did a great job to capture the contrasting tonalities of the top part of the wall and the bottom part, sidewalk, and street, with each of the darker ones having its own layering of tone.  And all of that is in contrast to the bright colors of the girls’ clothing and the red and white sign. In addition, you have the street as foreground, the sidewalk as middle ground, the wall as background, and the girls melding the middle and background together.

Finally, you have the girls well lit in all of that darkness, which adds to the three-dimensionality of the photo.  Not easy to do."

Richard Gunderman says, "After moving to LA, I started to think about how the world is viewed differently from a car than while on foot.

I am trying to capture the moments that are missed while looking out of the windshield of a moving vehicle. We are surrounded by people we never see. Our lives come into close proximity with others but there is almost no chance of interaction.  All around us is beauty and joy and sorrow and hope and desperation that we barely acknowledge if we notice it all.
Photograph shot from a car.
Growing up in Tampa, Florida, my father always had an Olympus around his neck.
It was here I first learned the basics of photography. After a brief career in radio, I discovered the joys of Television and Film Production, and now make a living as a Cinematographer.
After 26 years in San Francisco and 2 1/2 in Los Angeles, I am starting to do more still photography.
Contact:
richgunderman@me.com
STREET SHOOTING HOME PAGE:
http://www.laphotocurator.com/street-shooting-curator-carl-shubs