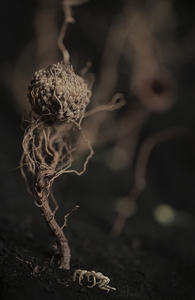 ORIFICE by Shawn Saumell
(Click on image for larger view)

CURATOR SUSAN SWIHART: "The image I selected for first place is, “Orifice”, from Shawn Saumell, which captured me from the moment I first saw it. It is a dark scene, but with beautiful shadows and light. Two small puppet-like figures at the bottom of the frame completely changed what appeared to be a familiar plant, into something much larger, stranger and unrecognizable. What is the mysterious blurred pieces in the background? Another foreign plant or menacing figure? This picture had me searching for more. Wondering about this alien landscape and what it all means. I hope to learn more about this work when Shawn shares his inspiration. Congrats!"

QUESTION FOR SAUMELL FROM SWIHART:
“I would love to know more about this work, but also what inspires you to create such mysterious images?'

SHAWN SAUMELL: "The inspiration for these images come from concepts derived of the conscious and subconscious. It usually begins with a dream. Then, a voice in the back of my mind takes on direction and paints a pre-visualization. It’s almost like a slightly out of focus image that becomes more clear the further I advance in the process. This apparition cultivates to occupy more of my being, thought process, and begs to manifest. An overarching concept develops, and then parts of the whole, then details, and micro details. Much of my interests and curiosities bleed through the work, ideas and curiosities that plague me are exercised through the media.

This specific body of work explores four seasons of life, which may be viewed as a cyclic journey. I have always wondered about secrets and the purpose of life since I was a child. This remains with me. The more answers that I believe to resolve, the more questions arise. This work is very esoteric. It’s almost as if it is mysterious work about various relative mysteries.
There are clues and cues embedded throughout the imagery. The dialogue between the figures vs environment, and figures vs figures seem apparent. Many viewers project their own narrative in to each piece and perhaps the body of work as a whole. I do not disqualify each interpretation, but rather welcome each and every one. The relation between the piece and the viewer may be very intimate and very private as each person contributes to the puzzle by adding their: loves, fears, prejudices, fantasies, experiences, culture, etc. With each new visual consumption, the images incubate in the mind, process, and then breathe a new story or chapter into each piece. These narratives layer to meta-narratives, then begin to overlap and weave between one another. This is the life of the work. When viewers concede ones eyes to the piece they surrender themselves to the residual haunting that each piece possesses.

I would tell you more, but don’t want to reveal too many secrets; it may take some of the mystery out."

CURATOR CAROLYN HAMPTON: "I think this image quite successfully fits the theme of "Secrets and Mysteries" as it captures alien-like figures in a mysterious, unfamiliar world. I particularly love the shallow depth of field, and the use of some type of organic, earthy material, in a striking composition. Well done!"

CURATOR STEVE ZMAK: "The title “Orifice” doesn’t resonate with me so I’m setting it aside and just going with the image. Shawn Saumell has created an image so surreal and on the fringe of the imagination, that every viewer is going to have a completely different interpretation more reflective of themselves than the artist’s intention. That’s the real beauty of this photo, its ability to provoke thought and let the viewers’ mind wander and meditate on it. It’s understanding is not immediately apparent which holds our attention almost indefinitely—like staring into the Abyss. For me, it’s a vignette into a sci fi / fantasy world of secrets and mysteries that will require more thought."
----------------------------------------------------------
Shawn Saumell was born in New York [1977] and currently lives and works in Dallas. He received an MFA from Lesley University College of Arts and Design formally known as The Art Institute of Boston at Lesley University, a BFA from Texas Woman’s University, (magna cum laude), and an AA in photography from Collin College, (cum laude).
He has had a recent solo exhibition at the Governors Island Art Fair, New York, NY [2015]; JM Gallery, Dallas, TX [2015]; Cohn Drennan Contemporary, Dallas, TX [2014];  and recent juried exhibitions at the BWAC, Brooklyn, NY [2015]; One Arts Plaza, Dallas, TX [2014]; PhotoPlace Gallery, Middlebury, VT [2014]; One Arts Plaza, Dallas, TX; and the Museum of the Living Artist, San Diego, CA [2013]; as well as recent group exhibitions at the Viridian Artists, New York, NY [2015]; Warehouse XI, Somerville, MA [2015]; University of Texas at Dallas, Richardson, TX [2014]; Limner Gallery, Hudson, NY [2014]; and f.i.g Fashion Industry Gallery, Dallas, TX [2014].