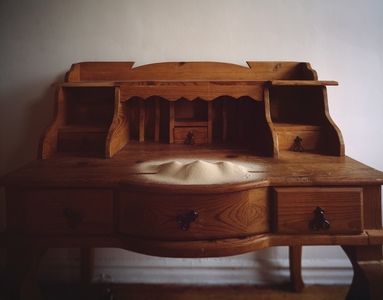 Curator Bree Lamb says of this image,
"This image is brilliant in its simplicity.

It’s subtle and poignant, and Friedlander employs familiar objects and spaces, as well the title “The Judean Mountains” to inform the viewer of the underlying idea.

After my initial response to the pleasing
composition and excellent use of light, I noticed the detail of the line down the middle of the sand.

This image encompasses everything the call was looking for: intentional use of the familiar in a nuanced manner, a strong eye for composition, and an overarching concept that ties together the technique and execution."

Bree Lamb asks,"Could you tell us a bit more about your decision to integrate everyday objects and domestic spaces as a means to address larger cultural or political ideas?

Yoav Friedlander responds, "I treat the interior of my home as if I was looking inwards daydreaming. Photography allows me to animate the still environment of my everyday surroundings. From a certain perspective the camera turns the house into a landscape, it is then where a key object or formation holds everything together in the context I wish to convey through the image.

Photographs are good at forming these kind of illusions. We are forced to see from a fixed, single lens, perspective where everything geometric and color is placed together in a convincing harmony - the composition. Originally I am from Israel where the landscape is far different from here in New York.

The distant made me suddenly aware and sensitive to the formation of my homeland desert landscapes. Treating my apartment in Queens, New York as if it could pretend to be somewhere else is possible due to all preceding images.

Our perception is infused with images from everywhere in the world. We've seen so much through images that we are familiar with places we never set foot in. The slightest clue from the right perspective of a camera with an object or a form that act as a signifier we immediately retrieve a sense of familiarity and recognition from an enormous reservoir of images that adopted as our former sightings of the world.

By presenting the clues I can uncover the underlaying process of our perception of reality. I give the viewers so little, and they in return fill in the voids proving themselves how much they know and don't know, how much they've seen but haven't experienced in person. The fantasy of the desert as a vast landscape stretching to infinity, or how war looks like, or should look like, I explore and examine these cultural traits that relate to my personal history through the installment of illusions in my living space. Ideologically my home (away from home) turns into the Camera Obscura where the light enters selectively and the reality outside is reflected inside with some distortions.

Even with its indexical relation to the reality it depicts the camera somehow always ends up serving as a distorted mirror to reality. Therefore I use the trustful home environment to raise questions and suspicion of what we know and where do we know it from."

Lamb asks, "I'd love to know more about your approach to scale and how it factors into your decision making process for or visualization of an image."

Friedlander responds, "We are childishly attracted to the gigantic and the minuscule.

Familiar scenes and recognizable objects in an off-scale immediately arouse our curiosity. We are suddenly observing what we know either as if we were shrinked or that we turned into giants ourselves.

Even the most mundane everyday life depictions are immediately fascinating in an exaggerated scale - large or small - and for me that is a strategy to tempt the viewer to reconsider the unquestioned. I build scale models that rely specifically on preexisting images of places I can't access, that I haven't been to or certain kinds photographic depictions that accumulated into a certain mass that it is worth pointing at. I consider my images as the sum of all images that came before them.

Some of my models are recreations from a "photographic memory" and I put that in quotation marks because I doubt how trustworthy is my memory.

Making a miniature is a process of selectively choosing what to exactly replicate or at least to a certain point of accuracy. That is also exactly the point.

Photographs and miniatures allegedly share the same indexical relation to the origin the represent. Photographs reference reality and my miniatures refer to the photographs herein.

My miniatures allow me to explore the second hand experience of an actual space and then I photograph them and again I provide a single perspective of a three dimensional space.

The experience we get from photographs are second hand as well. Usually when people first look at my photographs of miniatures, and the miniatures themselves in the very few occasions they were on display, they can't see the flaws.

Seeing is so overwhelmingly convincing that we can't see the seams of the illusion even when they are in plain sight. In some cases people can't even tell they look at a depiction of a miniature space, but there is always a childish spark in their eyes when they are informed regarding the nature of the piece.

I make miniatures an use them as an instrument to explore the influence of photographs on our perception of the real and of reality. I present them hoping that the illusion they form will point at the illusion that photographs form on a daily basis. I make them to point out how the accumulation of images reinforces their realness - enough depictions of a certain kind can turn anything unquestionable.

Eventually I print them at a large scale, making the photographs immersive, but in reality the viewer is closest and farthest away from the origin."

At first glance this arrangement appears puzzling as the large desk overwhelms the small arrangement of sand that is contained on the desk top. Only after the details are noted, such as a bisecting line the sand in the context of the title of the photograph that the the metaphoric potential of the desk and composition becomes more apparent.

The ambiguity of the pictorial space does not provide any additional external information and I think this allows the viewer to contemplate and focus on the implications of the small arrangement. Very nice."
.
Douglas Stockdale
Artist, Educator & Mentor
Editor & founder (2008) The PhotoBook Journal
Featuring and promoting artist & photographers and their photographic-based publications
www.douglasstockdale.com
Consultant, LensCulture
https://www.lensculture.com/dstockdale

Curator Jeff Alu's review of the winning image, "This image really sings to me on a metaphysical level.

It reminds me of a scene that I might see in a film by Andrei Tarkovsky, with the camera slowly zooming in or out. It poses many questions in my mind for which I’m sure I won’t find the answers, and that keeps me interested in exploring the image further.

Feelings of a religious nature also speak to me. The beautiful and subtle lighting along with the symmetrical composition hint at religions of the west, and before I read the title of the image, the small hills of sand pushed me to religions of the east.  The title steered me in a different direction.  An excellent and intriguing photograph!
https://www.jeffalu.com/

Yoav Friedlander says of his work in general, "The works I produce are inspired by the exchange between an origin and its copy.

A mix of Scale models (photographs) and straight photographs, the body of works accumulates to form a conjunction between the documented and the reconstructed.

Although different, both the photograph as a document, and the indexical scale model visually represent, and claim to be self evident of an existing origin.

In the process of making photographs or scale models I am relying on preexisting images, as I am aware that I cannot reverse the influence of those images on my vision.

Thus I cannot reverse my perception of the origin, constructed by the same preexisting images. The miniatures are recreations of places I don’t have physical access to, personal memories, collective consciousness, and images of places and spaces that I saw only, or at first, photographs.

I make them with the intent that they will echo the realism of the original and bare the illusion of the photograph. The landscapes on the other hand are all shot from the margins of the road, and from that point as far as the eyes can see.

Originally from Israel, I’m adapted to see the landscape from the viewpoint of a car, always ready for quick escape. Surprisingly, in the U.S. I’m bound to the same position only due to the privatization of the land.

The images I make form the illusion I’m roaming the land granted with a full access to it. A foreigner on the paper and on the ground. Reality is not observed through naive eyes.

A world is experienced and perceived through what we see, and how we understand it, and perception is the overlayer responsible for contextualizing it.

We have immersed ourselves with photographs, aspiring to create a volume of copies equal in size to the origin they represent. Yet there is a tendency to miss the changes these copies inspire in the origin they reflect. Relying on photographs we find ourselves considering what is real to be different from how it should be according to its own image.

Clearly ever since the invention of the photograph, reality has become augmented by its own image."

More from Friedlander, “My Grandfather Kurt fled Austria to Israel immediately after the Kristallnacht, served in the British Brigades during WWII and later in the Israeli Army.

After High School I joined the Israeli army myself for a mandatory service as a paratrooper, and became the fourth generation of army soldiers.

I grew up in the valleys of the Judean Desert between Jerusalem and the Dead Sea. I am native to Israel but uprooted from my past.”

Yoav received his B.A in photography from Hadassah College Jerusalem (2011), and an MFA from the School of Visual Arts