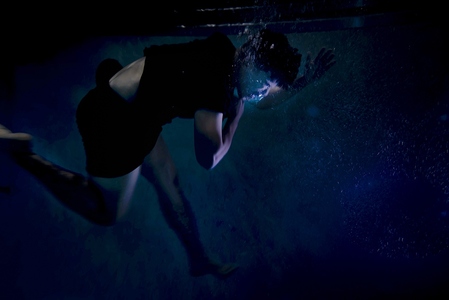 Curator Michael Behlen's review:
"I selected Lost as Sea as the title for this exhibition because the sea has had a great effect on me over the years and its imagery is easily applicable to all sorts of situations and dilemmas. The dilemma I have been pondering the most recently has been our constant bombardment by all things electronic and how that affects us on a personal, emotional, and spiritual level. It is my personal belief that our relationship to electronic conveniences and relationships have left us marooned on an island made up of likes, shares, website metrics. One of the ways we, as photographers, escape from being stranded on the internet is through our art. Photography allows us to see past the feelings of digital isolation into the calm seas of self-expression and community.

In my original prompt, I asked photographers to show us images that represent the places, people, activities, and things that help you escape from the daily hustle and allow you to live peacefully on your own personal island.

The winning image, The Blue Locker by Sarah Manriquez, did exactly the opposite of this. Her image shows us the panic we should all be feeling in today’s world where it is easy to feel a drowning sensation with the overwhelming flow of social media being inhaled in with our every breath. With her powerful submission, she broke the rules of what we were asking photographers to submit as all artists should, and I think it’s a great example to live by. So go breathe in a new mentality by breaking societies current rules of our digital prison by logging off, signing out, and tuning out all the things that are creating your digital isolation."

Behlen says to Sarah Manriquez,
"Your image is POWERFUL. Considering you submitted it to the Lost At Sea exhibition, can you tell us more about what this image means and represents to you?"

Sarah Manriquez says, "“The Blue Locker” is a part of a series of images from a dream sequence that accompanies a screenplay called “Fear Me” written by a colleague of mine, Kelsey Charlie. The dream world is one of mystery, magic and often chaos; leading us on incredible adventures through the subconscious mind. This psychological thriller discusses the self-fulfilling prophecies we create for ourselves and how they manifest subconsciously through our dreams and come to life.

Our main character, Wayne, who is depicted in the image knows he is falling asleep. He drifts between this unknown place and his bedroom. Every time he drifts to the unknown place he is
overcome with the feeling of terror. Unable to wake himself he sinks deeper into the dream where is submerged underwater and drowning. He gasps for air, thrusting and fighting against the weight of the water above him. He sees a figure looming overhead and an immense pressure around his neck.

He tries to wake himself up again, “This is just a dream.” He grows weaker and weaker, sinking further and further into the blue abyss. His world fades to black.
Wayne skyrockets out of his bed from a dead slumber to panicked frenzy, dripping, gasping for air, yanking the collar of his t-shirt as far from his neck as possible.  “It was just a dream, it was just a dream,” he mutters to himself repeatedly as he catches his breath. Or was it?

He wipes the sweat from his brow, his whole body is soaking wet. As Wayne leans back into bed and relaxes, he lets the weight of his body begin to settle. But, he seems to be laying in a pool of water on his mattress. His whole bed is soaking wet too. The skin on his fingertips pruney and his bedroom smells of rotting plants at the lake."

Behlen says, "We are constantly bombarded by electronic notifications, emails, and social media that seems to choke the life out of us. Can you share with us how you personally escape from these pressures?"

Manriquez says, "I work as a social media manager for several organizations as well as manage my own work too so the pressure is definitely on. Creating and abiding by healthy clear boundaries is crucial for me. Two social media laws I have created for myself are as follows:
1) Always Set a Time Limit: Part of what makes social media such an issue is that it’s a time suck. We scroll through our seemingly endless feeds and after two cute cat videos and several memes, the next thing we know we have been transported an hour into the future when we only initially meant to check a single notification. I set a time limit for myself and have a list of goals that I want to accomplish in that time limit. Staying focused and keeping the task at hand present during my allotted social media time keeps me focused on my goals and not overwhelmed or overburdened my social media.
2) Never aimlessly scroll out of boredom: I never, ever, ever scroll my feeds aimlessly out of boredom or procrastination. I make a great effort not to be a slave to my email or social media platforms. I schedule a time to work through what I need to do and outside of those times, I am free from those burdens."

Behlen says "If you would do a thought-experiment and describe how the photographic world and community would exist today if social media was never invented? How would you envision our community as artists? Would it be for the better or for the worse?"

Manriquez says, "Oof, I love this question but it’s definitely tough. I recently took a History of Photography class at the University of Alaska Fairbanks. One thing that stood out to me most was how connected the photography community was, how fast news traveled from one city to the next and the efforts that were put forth to share the work that was being made even during the mid-1800s to advance the field.

We are so incredibly connected in this day and age. And, photography becomes increasingly competitive with every single day that progress and accessibility to cameras grows. The more connected we become to each other through social media and the internet, I find that many everyday photographers in the local markets are concerned about competition and tend to work in silos in fear their secrets may cause them to lose their competitive edge.

With all the superficial sharing that is often done on social media, I can’t help but wonder if there would be more genuine sharing community. With that said, I have had the absolute pleasure of finding pockets of this type of sharing but it usually is found unexpectedly."


Additional review by curator Steve Zmak:
"The darkness, the panic, the struggle—these emotions come flooding through in this image that illustrates the Lost at Sea theme with power. Anyone who has ever felt the panic and loss of control of drowning will be instantly moved by this piece."
Steve Zmak
SteveZmak.com


Additional review by curator Ellen Wallenstein:
"Drowning, dancing, dreaming; a clothed figure underwater breathing out what could be their last breath. The deep blue-blackness around the figure envelopes it, despite particles of light that sparkle from the mouth and on the right side of the image. It seems like they are crying out for help, but there is No Exit. I would re-title this Ouze River Blues (referencing Virginia Woolf’s drowning place)."
Ellen Wallenstein
www.ellenwallenstein.com