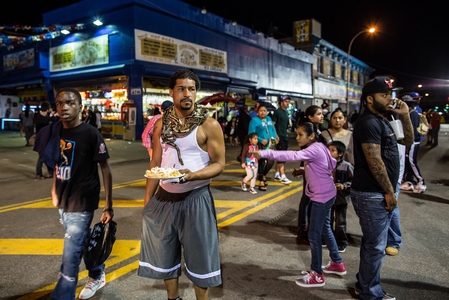 APPETITE by Kelly Stuart
(click on image for larger view)

Kelly Stuart is a Brooklyn based photographer and playwright who photographs dance, theatre, and the spontaneous street life and performance of the city.

She is currently working on a multi media project dealing with police violence, surveillance, and resistance. Past media projects included documenting (and translating) the songs of Kurdish Dengbej singers in Diyarbakir, Turkey.

Her plays have been performed in the US as well as internationally, and she has been awarded a Whiting Fellowship, as well as a grants from New York Foundation for the Arts, the Jerome Foundation and many other theatrical commissions.

She turned to photography after feeling that the theatre is too remote from the people whose stories she wanted to tell.

Stuart says of her work, "I’m looking for the theatrical moments that happen to us as we come into recognition—of ourselves, of the little mysteries or secrets we’ve pushed away, or of the people around us.  That moment we understand something we didn’t know the moment before—there’s a little light… That’s what I’m looking for. Sometimes I see it in the moment a person sees me photographing them, but often it’s just watching the way people are spectators of each other.  I like to find the precarious moment, before things break or freeze or separate—for me, it’s a moment of possibility.

This image, 'Appetite'-  Coney Island Fourth of July, waiting, with a funnel cake, and a snake" 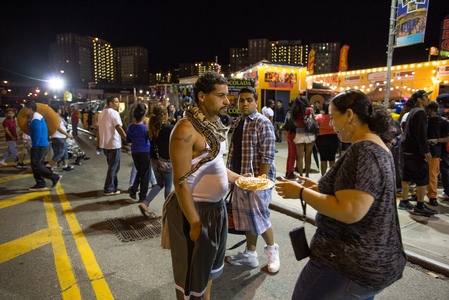 SATISFACTION by Kelly Stuart
(click on image for larger view)

Stuart says of her image, 'Satisfaction'- The funnel cake was not for the snake after all." 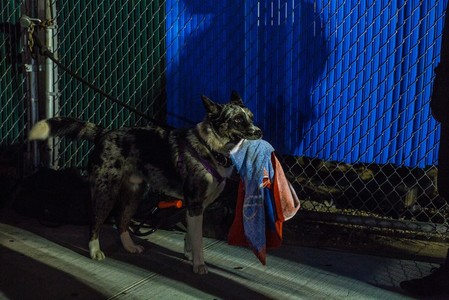 THE ASSISTANT by Kelly Stuart
(click on image for larger view)

Stuart says of her image," 'The Assistant'- Best Fourth of July Coney Island Dog in the World. He carries your towel." 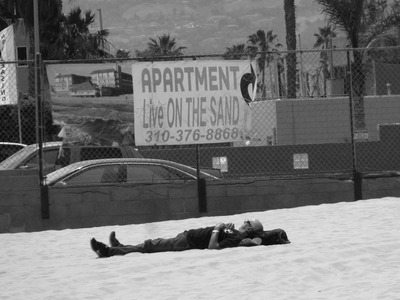 First Place winning image. Larry Horowitz says of his work, "I have been a photographer for 50 years, always shooting people. Though photography has never been a significant source of income, I have over the years worked for national magazines and corporate sponsors of concert and sporting events.

Today I shoot with my Iphone, Nikon D100, Sony Cyber-Shot.

I was away from photography for a number of years due to my eye sight.  I could no longer focus a clear shot. Digital and auto focus rescued me.  While I do not understand all of the technical aspects of today’s cameras. I have learned over 50 years, what, when and why to shoot the picture.

Photography is three disciplines:
A challenge to go out and bring back a good picture, an art form that can bring forth emotions, and a record of a moment that will never be again.

For me, photography is never an obsession.  Always a pleasure." 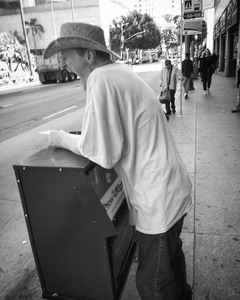 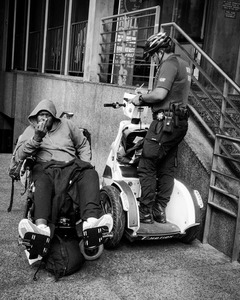 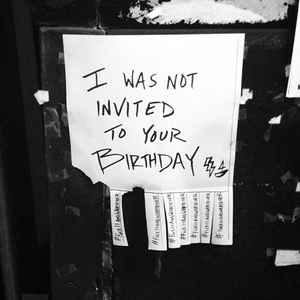 BIRTHDAY by Ruth Raveh
(click on image for larger view)

Ruth Raveh is a Brooklyn based Digital Artist. Her work ranges from commercial app work and animation for major NYC studios, to street photography and mixed media.

Her photographs were recently presented in London, NYC and Portland, and online at F-stop Magazine and Dergreif.

Her recent work explores concepts of belonging and displacement. She discusses her place as a constant visitor: in this city, neighborhood, culture and religion. Israeli born, a legal alien, she absorbs and documents her surroundings, creating visual harmony using fragments of spaces, bringing attention to the subtle, invisible to most people.

Ruth has a BFA from Bezalel Academy of Arts and Design in Israel (focus on Photography), and a MFA in Design and Technology from Parsons School of Design in NYC. 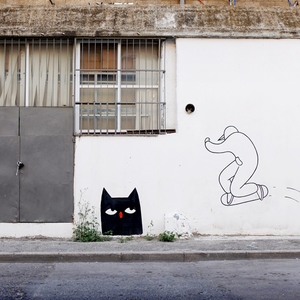 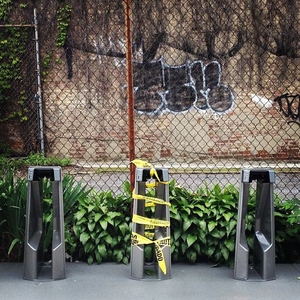 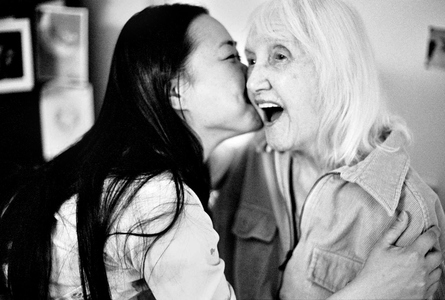 Shana Einhorn says of her work, "I am a fine art photographer from Huntington, NY. My art is not about image, it's about essence and as such I think of my work as a spiritual photography. The images explore one’s connection to self, each other and the natural world, using mostly old manual cameras with black & white film and lately mobile photography. I came to photography two years after a cancer diagnosis back in 2003 when a friend loaned me a camera. While struggling with questions regarding despair vs. life the camera became my lifeline. It soon became apparent that photography was to become my life’s endeavor as a connection to the medium quickly deepened. One can say that I used this new opportunity as a way to re-shape my world. My intention was to connect and make good pictures; not to theorize about them – that came much later. The constraints and ramifications of living with chronic illness inform much of my art, as themes of connection and isolation permeate much of the work. Ultimately it is an inquiry about belonging, significance and connection. My work has been in over 30 group exhibitions, and currently is in 3 private collections.

"I didn’t set out to create a series based on my Aunt Violet. I simply wanted to capture her image, to add another dimension to the memories she created for me. Aunt Violet was amongst many things, an artist. She created art in the form of sculptures and paintings, and in the way she lived her life. She painted with Rivera and was Orozco’s only assistant, and she treated the world around her with tremendous kindness and love. We talked often of living in a cottage in the woods, each of us making art. But life, as it so often does, got in the way.
I became an artist many years after she’d been forced, by finances and age, to give up her Soho studio and then eventually move to a nursing home. Our visits there tended to be short; my energy was low due to both a serious physical illness and the emotional toll of seeing Aunt Violet in a nursing home.
This outtake, “Aunt Violet & Mij”, was made on her 99th birthday. She died in 2008, at the age of 100.

And so, what began as a group of photos captured for my personal archives became, unexpectedly, my homage to a woman who inspired me, loved me, encouraged me, provided a blueprint for living. My tribute to Aunt Violet." 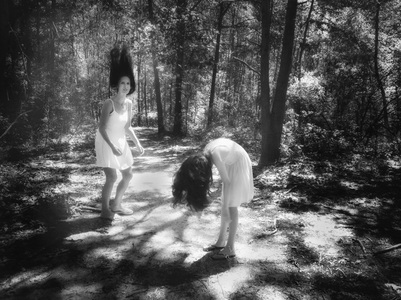 Einhorn says of this image, "This is a funny, most unexpected outtake from my new and on-going series, Compost, where I am exploring, as well as creating, the narrative within the mother and daughter relationship. Lorraine and Bella have been my primary subjects. The following quote has been a guiding principle:
"... human beings are not born once and for all on the day their mothers give birth to them, ... life obliges them over and over again to give birth to themselves.” Gabriel Garcia Marque" 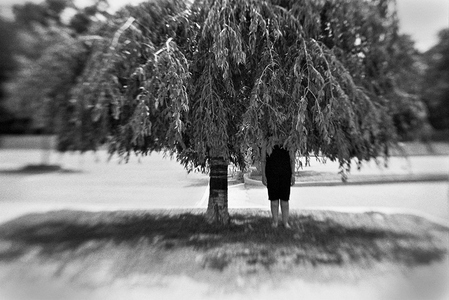 Einhorn says of this image, "While shooting self-portraiture one afternoon, on a whim I phoned my mother to ask if she'd like to come over and be my subject. And so began a 2 year body of work, "The Mother Series". Until that moment I had no interest in including my immediate family in my art. It was mine. Instead I have been focused on creating my own sense of family in my work. Unbeknownst to me I entered a new realm that day. My axis shifted and continues to. I directed & positioned her in every frame, carefree and unaware of what I was doing; simply trusting and enjoying the process. In the end this series became an active meditation on personal empowerment. As such, it speaks to the universal archetype of feminine power incorporating freedom, integration, reclamation and re-birth.