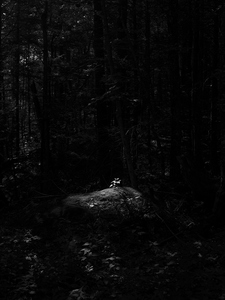 DREAM by A. Lowey
FIRST PLACE
(Click on image for larger view)

Curator Paul Ivanushka's review:
'"Dream", a photograph that we as photographers strive to produce. First, the image of a small branch having its moment of glory before the light disappears for the day behind the primeval forest. As small as it is, its regal moment in the light, finds it standing out almost in triumph on an alter of rock.

The scale of small vs. large is exacerbated by the drama of the lighting and the juxtaposition of this small branch against the large trees in the background. I find that there is a tension created by the subtle detail of the trees in full shade with just barely enough detail to be trees. I love the tonal layering; the highlights of the branch (with detail) on the middle grey tones of its rock alter with the deep blacks and subtle shadow details providing a backdrop for this religious ceremony.

Lowey has woven attention to detail, creativity and technical excellence into a stunning photograph."

Ivanushka asks, "Why did you take this image? What was your intention?"

Lowey says "I take long walks in the woods every day. My walks in the woods nourish my spirit and reconnect me with myself.  I had been working on a series (Symbiosis) in which I was trying to capture anthropomorphic gestures of tenderness and intimacy, representative of what I have lost in my marriage.

To do this I was shooting in low light and overcast conditions. At the same time I was trying to work out a way of expressing myself on a sun filled day. I had been reuniting with friends I hadn’t seen all winter.  They all asked about my ailing husband, who has many health issues, including dementia and heart failure. I noted that people asked questions or offered comfort with sayings which included something about light. Rays of hope, light at the end of tunnel, darkest before dawn etc.

On the sunny days I began to seek out scenes which embodied the "ray of hope” or "darkest before dawn” as a pictorial trope.  There are certain spots for me which seem to have a sense of magic. One such spot is the far end of a certain dam I used to cross to enter the woods at the base of a State Park. I would walk over the dam, talking myself through my mission for the day.  I would ask myself where my thoughts were going and what did I want to express? In 2017, when this image was captured, my husband spent almost half of the summer hospitalized in 4 different hospital stays. That summer in particular I was looking for hope. I was looking for a sign that he’d make it through, that I’d be strong enough to carry the burden of caring for him and our children, and that everything would end up okay in the end.

I came to the end of the dam and began to climb the mountain when I glanced at this small ray of light on the struggling little bud and then ever so slightly pouring over the edges and spilling over the growth in front of the cold hard rock.  I knew I had found my symbol.  I quickly raised my camera and managed to capture a few frames before the light shifted and the moment was gone."

Ivanuskha asks, "Why did you select this piece? What did you leave behind and why?"

Lowey says, "As the series about light evolved through the summer of 2018 I began to ask myself where my truth was. I wondered if the story or the message, my answers, were not in the light but in the darkness instead.

In the almost 2 years since I began this series I have grappled with moral questions, about life and death and have had to make some serious choices about what my demented husband is okay with and what the person he used to be would deem acceptable. I know now that there are no clear answers, that he and I might not have choices regarding how he wants to live or even if he wants to live. I am feeling much less hopeful and much more conflicted. I turned the image inside out an began to look into the shadows, to see if the darkness was speaking to and for me instead of the light. I don’t create an image of darkness which doesn’t include light, the question I am asking with those images is where the story is coming from.  I submitted three images of light and hope for this contest.

This image (see all of the images 3 in Lowey's page in Exhibition) were made in the early stages of this series, a stage that I feel I have more thoroughly investigated. I did not include the images where I have begun to consider the darkness. I am still in the thick of the darkness and haven’t captured everything I want to say in that manner.  The series is still a work in progress and I will continue to explore both sides of the story."

----------------------------------------------------
Lowey elaborates, "For over three years I’ve been the caretaker to my ill husband. Robbed of both his health and his mind he spends his days sitting in a chair in front of the television. His dementia is a behavioral variant, he has become an entirely different person. No longer a strong commanding figure with a sharp fast thinking mind and a wicked dark sense of humor, he is now gentle and slow, unsteady on his feet, searching to make order of the few things he can understand. We exist together and apart in this lonely place.

He is oddly content in his diminished existence while I rail against it each step of the way. Each morning I steal away to spend time in the woods. In nature I consider the sayings which are so often said to me. I wonder if, despite his grim diagnosis, there are rays of hope. I’ve been advised it is darkest before dawn. I am told there will be a light at the end of the tunnel. So, I search for the light wondering if the answers are there, or maybe, I hope, I'll find my solace in the light.
After a decade in photojournalism I decided to reinvent myself as the fine art photographer I had always intended to be. I got my MFA from The University of Hartford in 2015 and 3 months later my husband could no longer work. In the time since earning my MFA I have been creating images in the woods which reflect my experience as I am pulled into and move through his illness.
Since receiving my MFA I have not been actively marketing my work, other than attending the Review Santa Fe in 2017. I did get a mention from Jonathan Blaustein on his blog.

http://aphotoeditor.com/2017/12/08/the-best-work-i-saw-at-review-santa-fe-part-2/ , The work he highlights is also work which speaks about this same difficult period of my life."
alowey.virb.com
insta: a_lowey